Nature is amazing and full of many weird phenomena and wonders that stun us once we see them. They leave us fascinated and surprised and they also increase our curiosity which motivates us to discover more about these natural phenomena, how they happen and the main reasons that are responsible for the occurrence of such rare phenomena. These rare natural phenomena occur from time to time, do not happen in all countries around the world and sometimes you may find that science is unable to explain these weird phenomena that rarely happen to remain mysterious for us for a long time until they are finally explained.

Do you want to know more about the secrets of nature and some of the rarest phenomena that happen in this world in which we live but are hidden away from our eyes? If you are one of those who are fond of nature and its mysteries, take a look at the following top 10 rarest nature’s phenomena that are really incredible. YOU WILL NOT BELIEVE YOUR EYES. 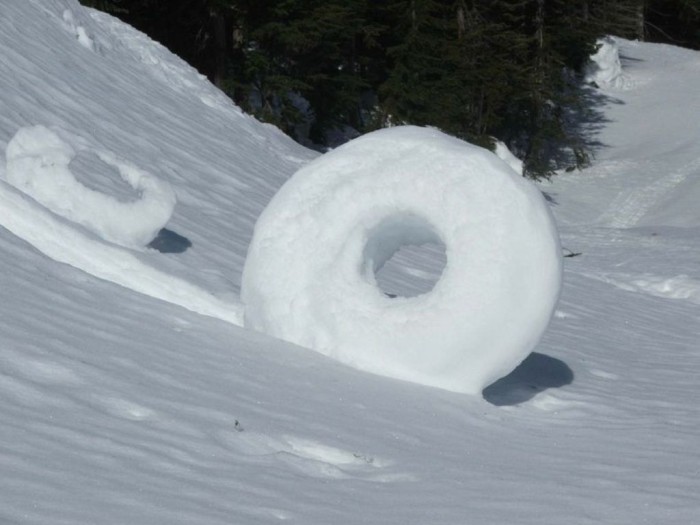 They are a meteorological phenomenon that is also known as snow rollers. Wind blows chunks of snow along the ground to form large cylindrical snowballs that are hollow and look like doughnuts and this is why these snow rollers are commonly known as snow donuts. Snow rollers differ in their sizes as they can grow and become larger by wind until they reach 2 feet in diameter. Forming these snow rollers or snow donuts requires a surface of loose snow, temperature which is near the melting point of ice, powder snow or ice and strong wind to be capable of moving the snow rollers. 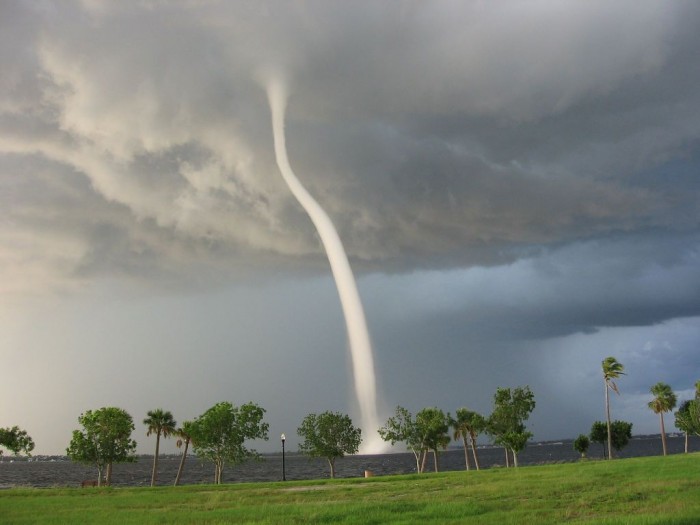 They are intense columnar vortexes or rotating columns of air that usually take place over the surface of water and are considered to be non-supercell tornadoes. Waterspouts are small and weak and they can occur in different places especially in tropics and subtropical areas. Waterspouts are also common in New Zealand, Antarctica, the Great Lakes and Europe. They are not harmful since they happen over water and if you are in a boat with this phenomenon occurring beside you, then you have to be careful and keep away from it as its speed can increase to reach up to 305 kilometers per hour. 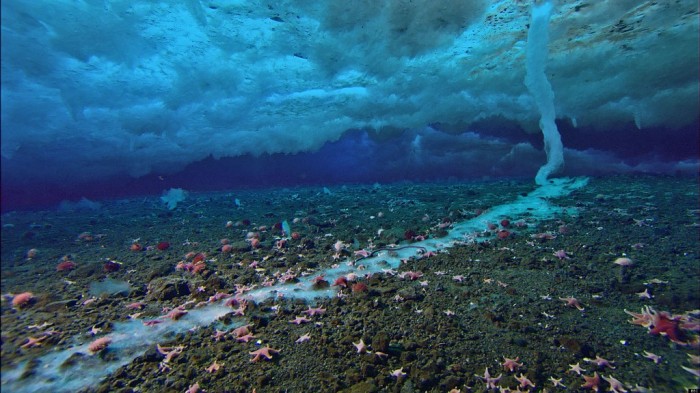 It is also referred to as “brine icicle” and “ice stalactite”. This weird phenomenon takes place beneath sea ice when a flow of water which is extremely cold and saline runs to ocean water which is less cold and salty to form a pipe of ice under specific conditions. A brinicle is fragile at the beginning and becomes more stable and stronger when ice accumulates making the walls of the brinicle thicker. This phenomenon was first discovered in the 1960s and was filmed for the first time in 2011 for the Frozen Planet which is a British nature documentary series. 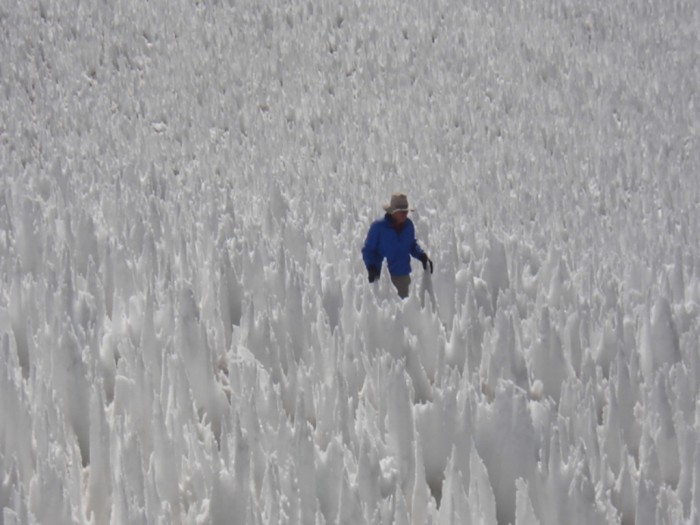 They are snow formations that are also known as nieves penitentes and can be found at high altitudes. They take the shape of snow blades which are tall and thin. They occur in the glaciated areas or the areas that are entirely covered with snow. They are more common in the Dry Andes at high altitudes which are 4,000 meters high. The penitents differ in their sizes as they range from just few centimeters to more than five meters high. They can cover large areas to form fields of penitents.

A supercell is not an ordinary thunderstorm as it is extremely strong. It is usually associated with the presence of mesocyclone and this is why it is sometimes called a rotating thunderstorm. There are four classifications of thunderstorms and this type of thunderstorm is proven to be the most severe and is fortunately the rarest one to happen. It does not usually occur with other thunderstorms and has the ability to dominate the local weather for up to 32 kilometers. Supercells are more common in specific areas such as the plains of Argentina, southern Brazil, Uruguay and Tornado Alley in the Great Plains of the United States. 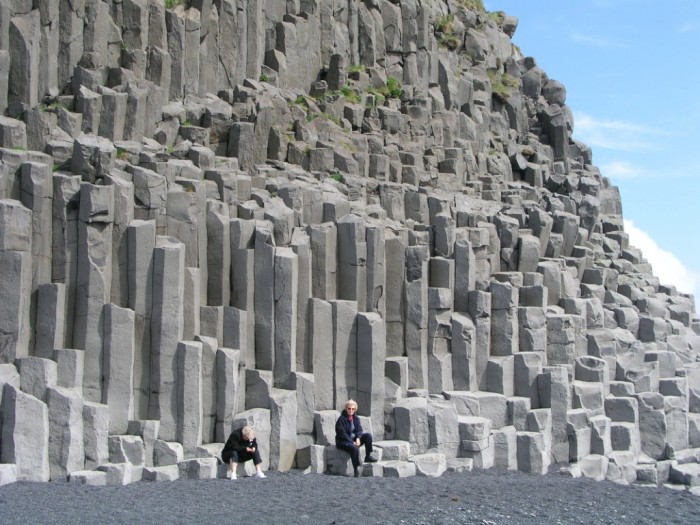 There are fractures or contractional joints that are formed during cooling thick lava flows. An extensive network of fractures is created which leads to forming columns and most of them are hexagonal in cross-section. You can also find polygons with several sides ranging from three to twelve and more. The columns that are formed vary in their sizes depending on the rate or speed of cooling the thick lava flows. Fast cooling of lava flows leads to forming very small columns which are less than 1 cm diameter while slow cooling results in creating larger columns which are really stunning and fascinating. 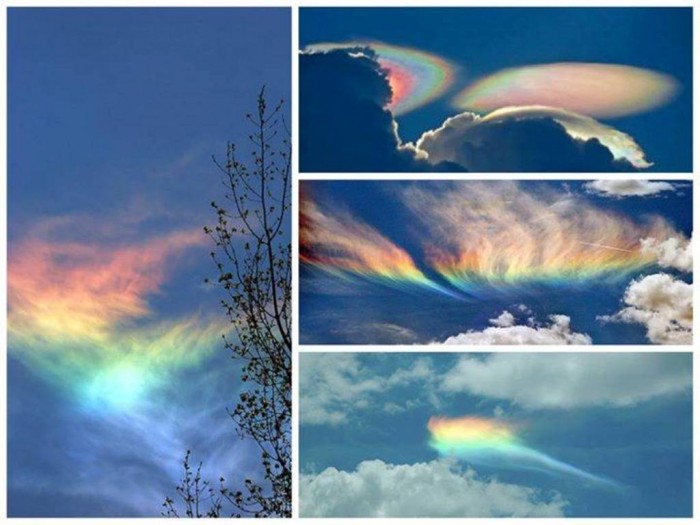 This optical phenomenon is among the most fascinating and rarest phenomena that you can ever find in this world. Its occurrence is not associated with fire or even rainbows that usually appear in the sky especially in the winter season and this is why the term that is commonly used to refer to this phenomenon is considered to be a misleading term. The scientific term that is used for referring to this phenomenon is circumhorizontal arc or circumhorizon arc that is created by ice crystals in cirrus clouds to form a large ice halo that appears in the sky like a rainbow that takes the shape of flames. This phenomenon is common in the United States and takes places in summer. 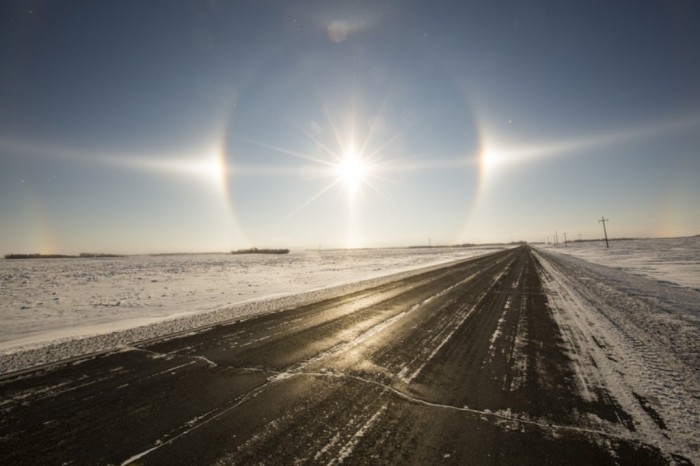 They are also known as phantom suns, mock suns and sundogs. The scientific name that is used for referring to this phenomenon is parhelia. Sundog is an atmospheric phenomenon that refers to a pair of bright spots of light on both sides of the sun and these bright spots are usually associated with a luminous ring that is referred to as a 22° halo. The large halos that you see are caused by the interaction between light and ice crystals that exist in the atmosphere. This phenomenon occurs at anyplace and anytime throughout the year but it is not obvious when it appears in the sky as the sun must be low to obviously enjoy seeing this unique phenomenon. 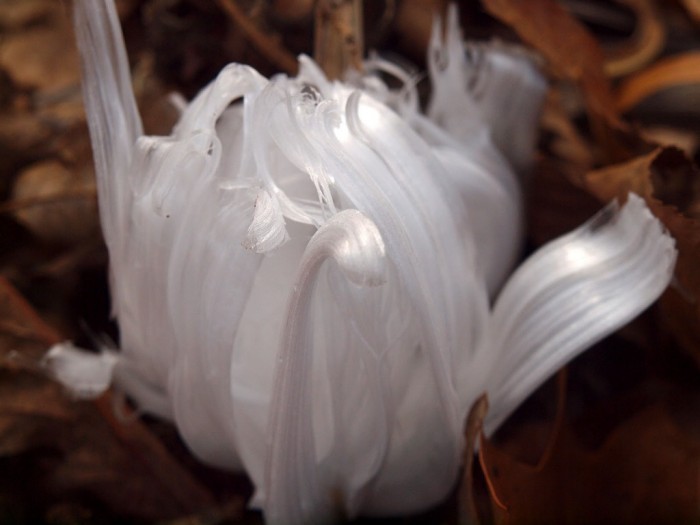 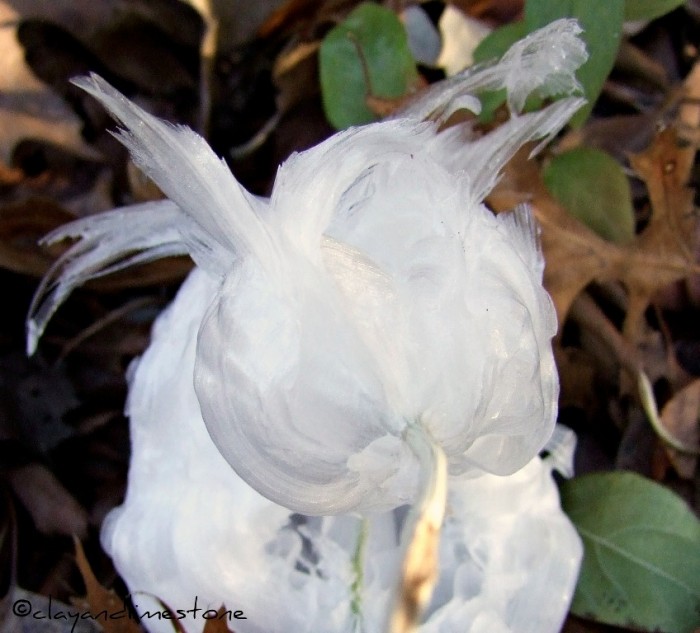 Flowers are always fascinating and charming although they are traditional in their shapes and colors but they dazzle us once we see and smell them. This is for traditional natural flowers, so what about frost flowers? Frost flowers are among the most dazzling and awesome natural phenomena that you can ever see and enjoy in your life. This phenomenon takes place in autumn and early winter when long-stemmed plants extrude thin layers of ice. These thin ice layers are formed in different creative and stunning shapes that look like flowers when you see them. 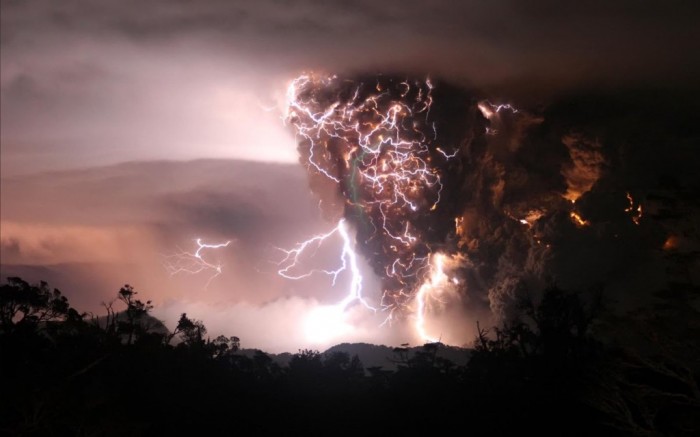 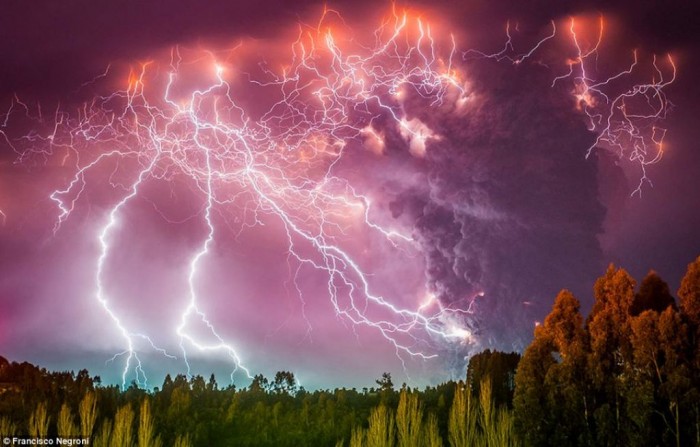 Lightning and volcanoes are among the most fascinating phenomena that usually happen in nature and they are not rare as there are many countries in which you can find them happening. What is more stunning and cannot be really believed is to see these two wonderful phenomena occurring together at the same time to give you what is called volcanic lightning that is also known as “dirty thunderstorm”.

It is one of the rarest natural phenomena that you can ever see. This phenomenon is really impressive and amazing since you can see a lightning storm during a volcanic eruption. According to scientists, this phenomenon takes place during a volcanic eruption that releases debris in the atmosphere. The debris is positively charged and these positive charges react with the negative charges that already exist in the atmosphere to cause this unique phenomenon that is called volcanic lightning. The large amount of water that is released by the volcanic eruption increases the thunderstorm. 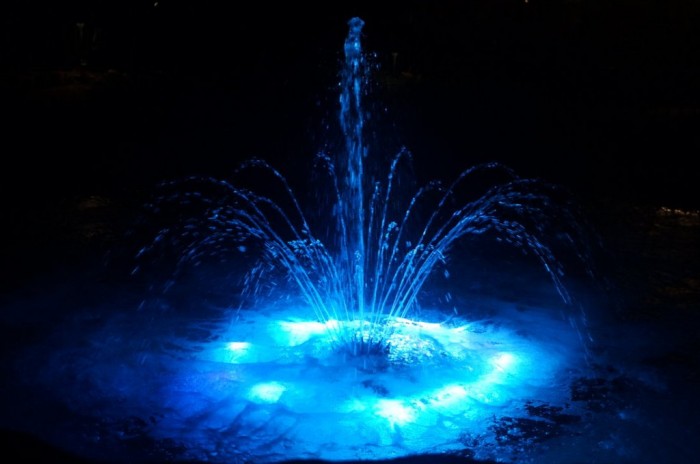 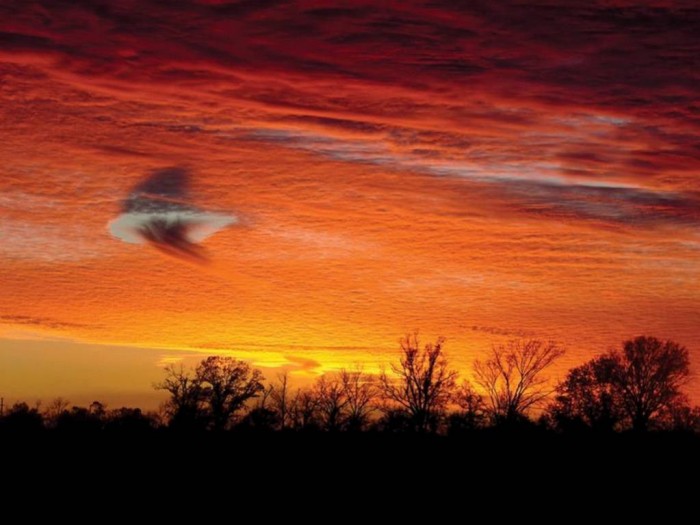 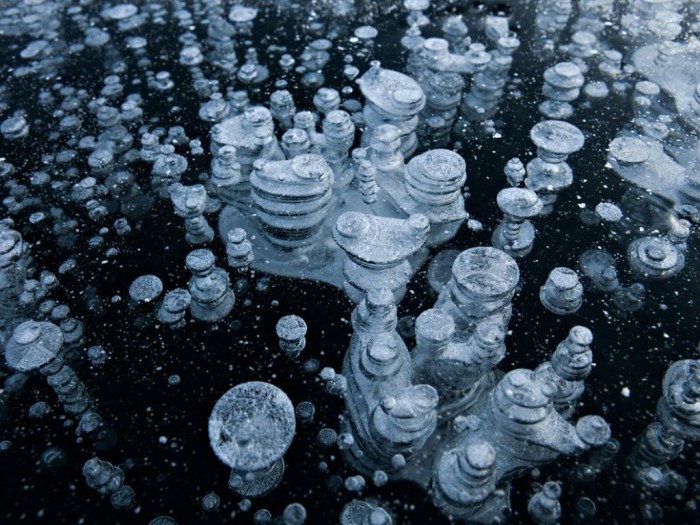 Which one is the most impressive?