“Everything is not what it seems”. You probably have heard this saying multiple times, but have you ever taken enough time to mull over the meaning hidden within these words? If you have, then surely you would have highly accepted it as plainly true because life taught us that some things appear astoundingly beautiful, but that is only because the flaws are not obvious to the naked eyes.
Nature is undoubtedly gorgeous in all of its forms and almost everybody falls in love with its beauty. Take the sea creatures as an example; most of the people are oblivious to the sea’s unleashed secrets that have been discovered by lots of scientists. Well, here is the truth; some of the water astonishing creatures are extremely dangerous because they carry accumulated toxins that can, in some cases, rapidly send people to death. It might be a bit shocking especially that poison is usually related to creatures like snakes and spiders, not to such beautiful colorful fishes. Their toxins can be caught by human beings either by eating these dangerous kinds or through direct contact, like getting stung by them. Check out the following list of the top 10 most poisonous fishes existing in the sea world.

The puffer is a fish that has a rough skin, and capable of pumping itself up with both water and air, becoming larger in size to protect itself when it feels threatened or bothered. And that is most likely why it is also commonly known as either Blowfish or Swellfish. This fish carries an exceedingly lethal substance called Tetraodontoxin, and it is highly intense in its internal organs, especially the liver and ovaries. This toxin directly affects the neural transmission, leading to total paralysis, and in extreme cases, to death. The good news is, the puffer is incapable of injecting its toxin onto human beings through direct contact, but that doesn’t make touching its skin a pleasant experience. The danger of this fish lies in eating it, and shockingly, people in Japan still eat it despite the fatal risk, but it is only served in places where it is cautiously cleaned by skilled chefs that are certified and highly trained to do so. 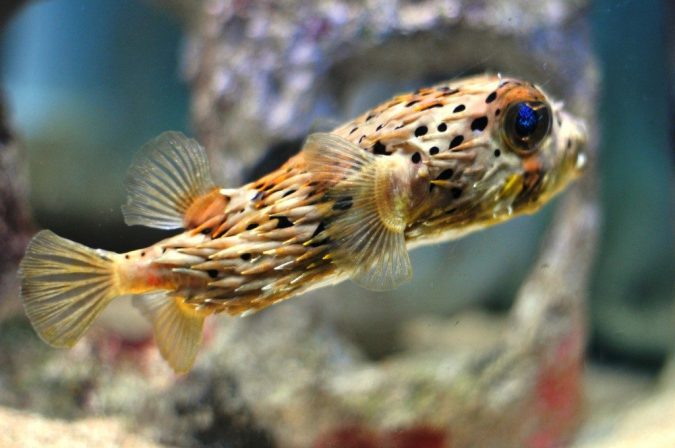 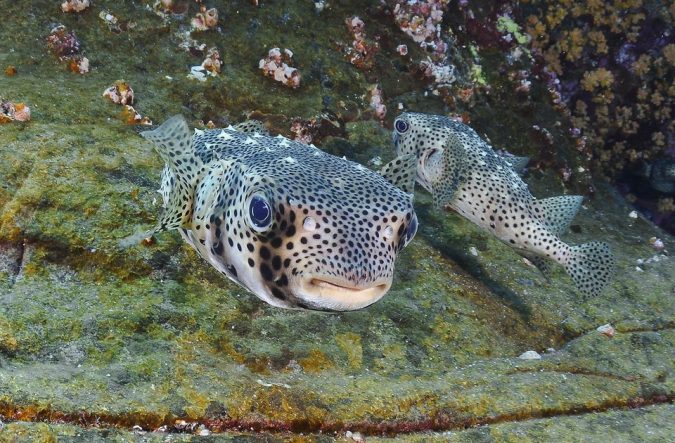 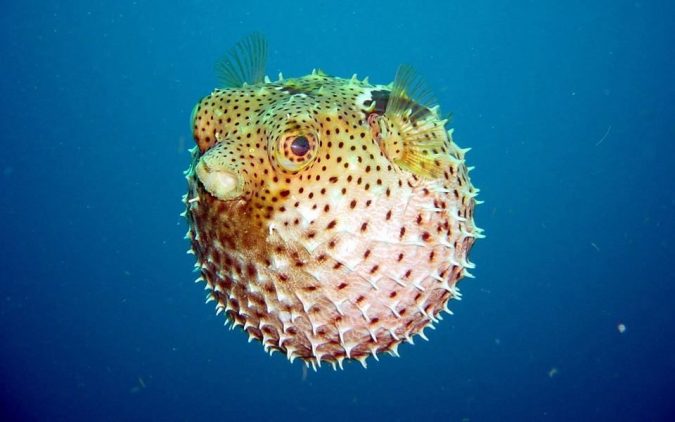 You might have seen this creature in cartoons before, or even learned about it in school, and either way, we can’t deny the fact that this fish, despite how dangerous it really is, stirs up curiosity. The electric Eel is one of the very few fishes that can breathe outside of water, because its mouth is filled up with blood vessels, allowing it to swallow some air. However, it does not have that extraordinary appearance that you would like to look at, for its figure is relatively long and wiggly, but what is really special about it is the fact that it can release shocking electricity reaches up to almost 600 volts, which is more than enough to kill all the living creatures around including human beings, if there are any. 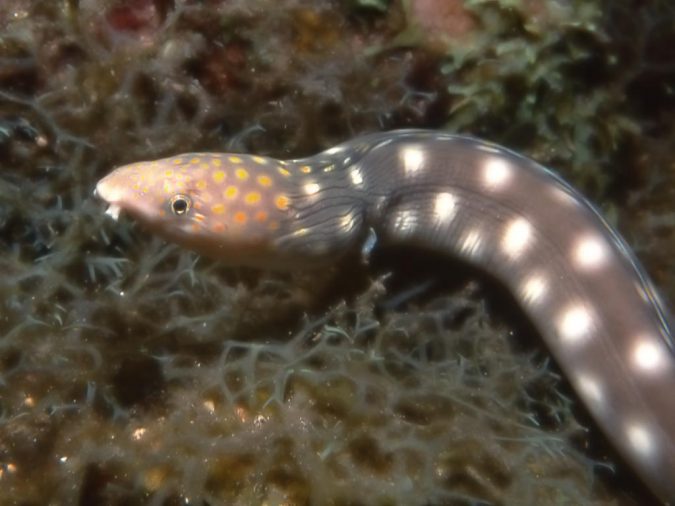 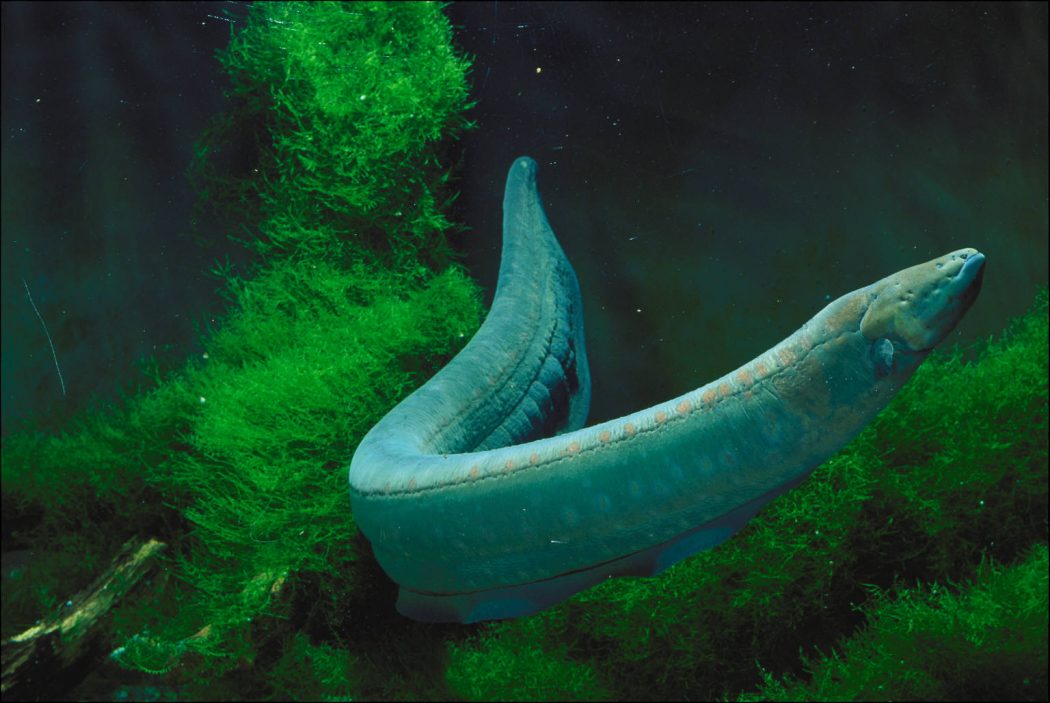 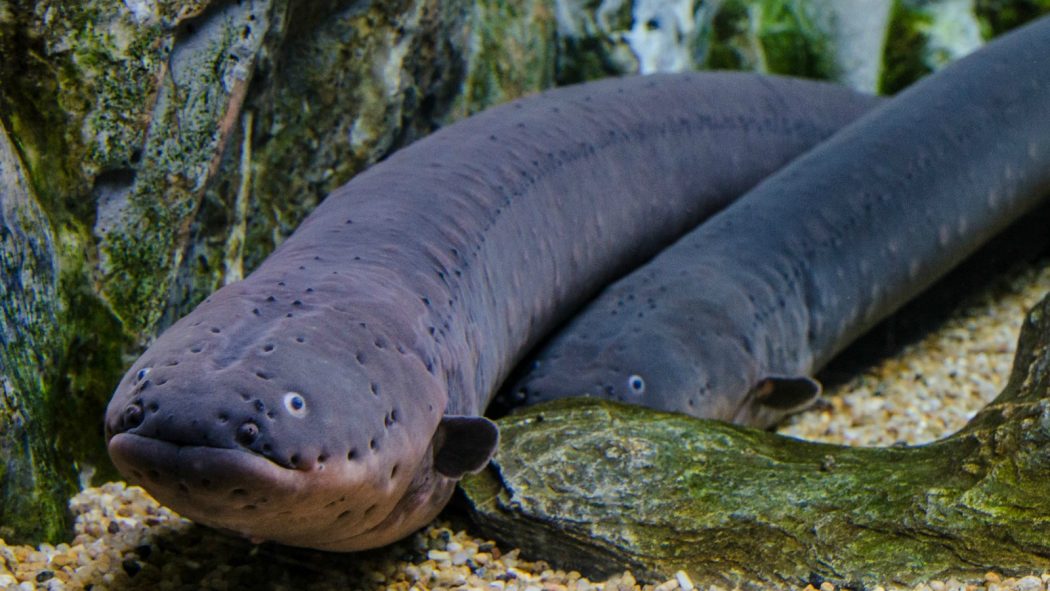 The Boxfish was not called by that name haphazardly; in fact, it really has a box-shaped figure that makes it look quite interesting. Still, it is one of the most poisonous fish existing since it releases highly toxic substances known as Ostracitoxin and Pahutoxin. The Boxfish is dangerous only when it feels troubled or under a threat, which is the case most of the time since it is surrounded with multiple larger fishes and sometimes divers. When releasing its toxins into the water to defend itself against the targeted enemy, unfortunately, these toxins can also affect just a stone’s throw away creatures, sending them to immediate death because the poisonous substances entirely destroy the red blood cells, putting an end to the function of the respiratory system. 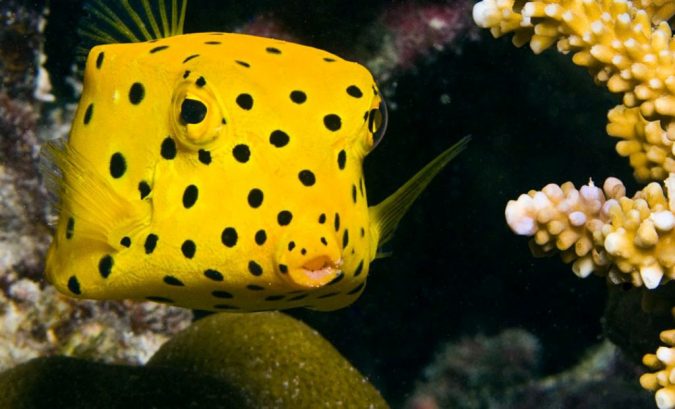 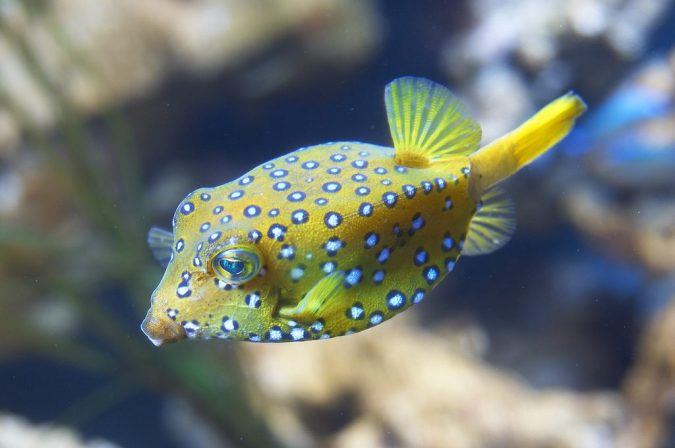 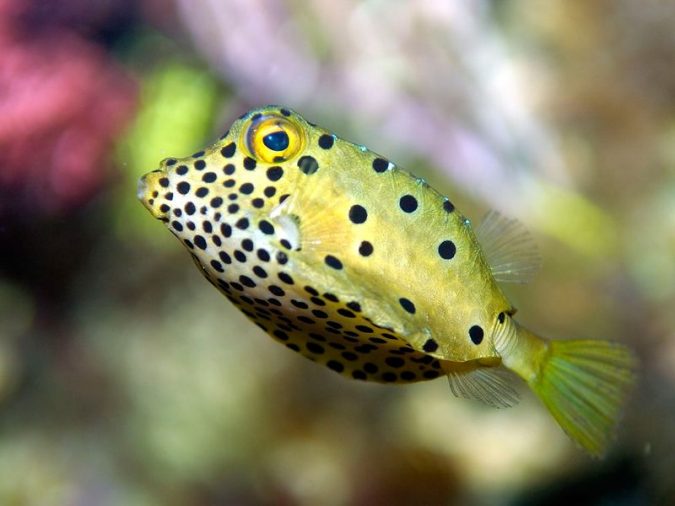 You might have seen The Stingray featured in Disney’s animated movie Finding Nemo, but the real life one is, unfortunately, not really such adorable, which is quite obvious since it is listed as one of the most poisonous fishes. The toxin of this fish is mainly concentrated in its tail, and it is discharged when that fish violently thrashes its tail spreading these rays all around. If any human beings happen to be around during the attack, they can catch an extreme infection, escorting to severe bleeding. These rays mainly destroy the cardiovascular system, and terrifyingly some of these rays get obscured under the seafloor; consequently, humans can accidentally step over them, getting infected and might die. 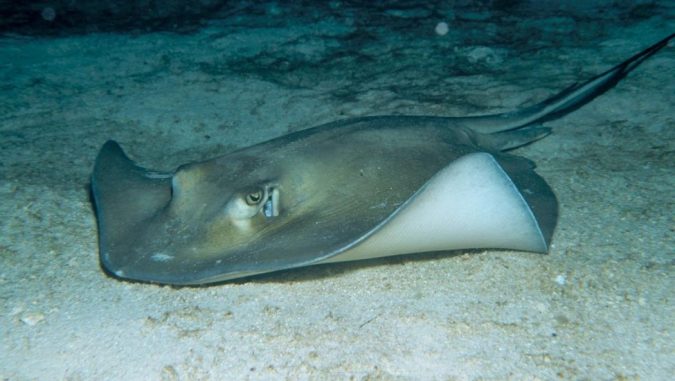 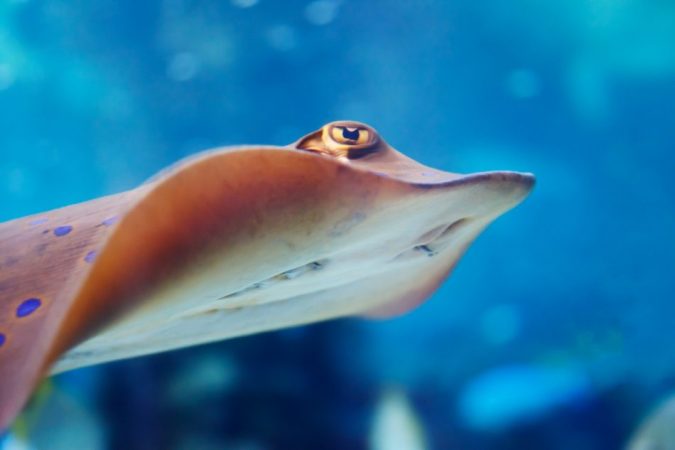 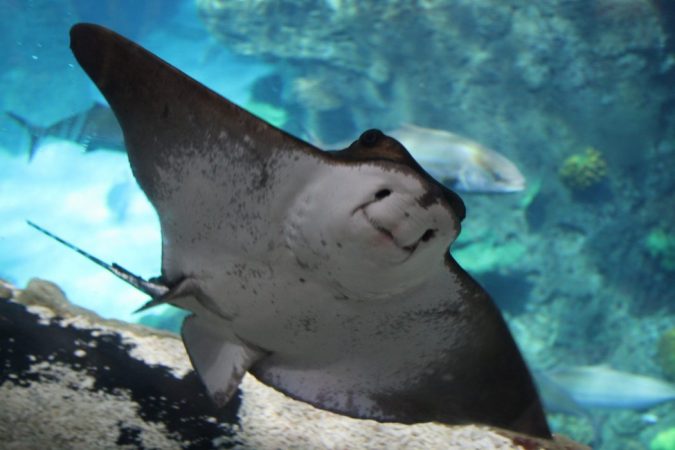 Well, there is no need for a long introduction about this fish, the Piranha, since it is probably the most widely known dangerous fish on that list, and it was featured in some of the most popular movies for multiple times. The Piranha is known to be vastly abundant in the Amazon River. It might be relatively small in size, but that does not make it any less dangerous, for it has sturdy sharp teeth that allow it to tightly grab its prey with no chances of escape, and when it bites human beings, it gets to the bones in no time, causing severe bleeding and pain. Piranhas mainly feed on other marine creatures, but still, it gets pulled towards the smell of blood, so humans are not safe from its brutal attacks. 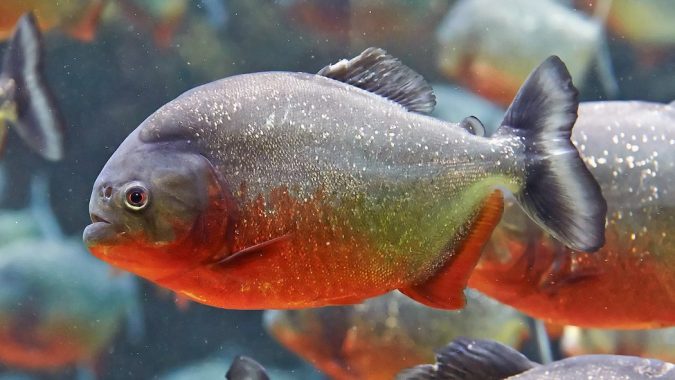 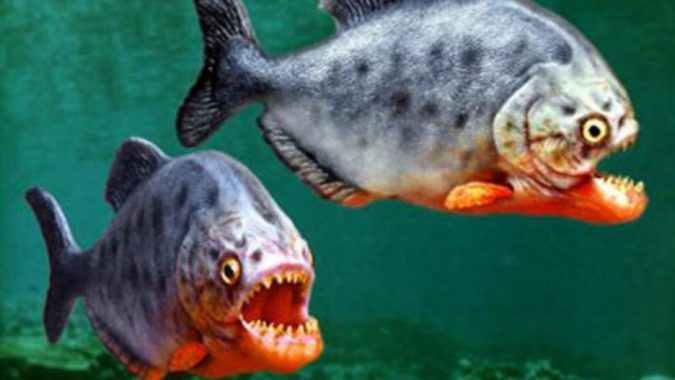 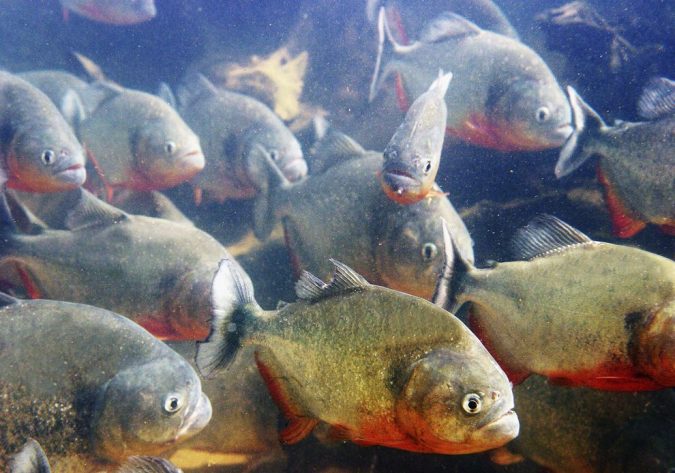 Needless to say, giant creatures are terrifying because you might not be able to defend yourself against their violent attacks, but sometimes tiny creatures can be even more terrifying, especially, when they are too small to be seen or caught.  Vandellia Cirrhosa is an extremely tiny fish that is capable of causing severe damages. This horrifying fish feeds on urine and blood; consequently, it gets highly attracted to the humans’ genital organs, and it has a way to successfully penetrate them, sucking the blood out of these organs and leaving the victim in tremendous throbbing. Its extremely tiny size makes it very hard to remove out of the body, so in some cases, amputation remains as the sole cure. 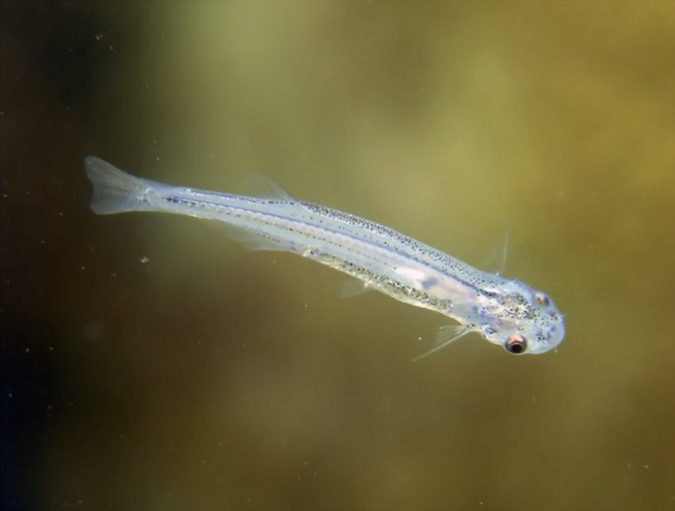 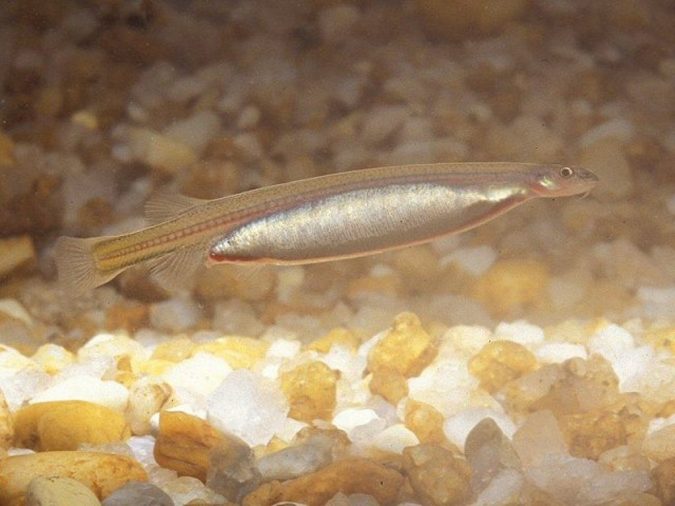 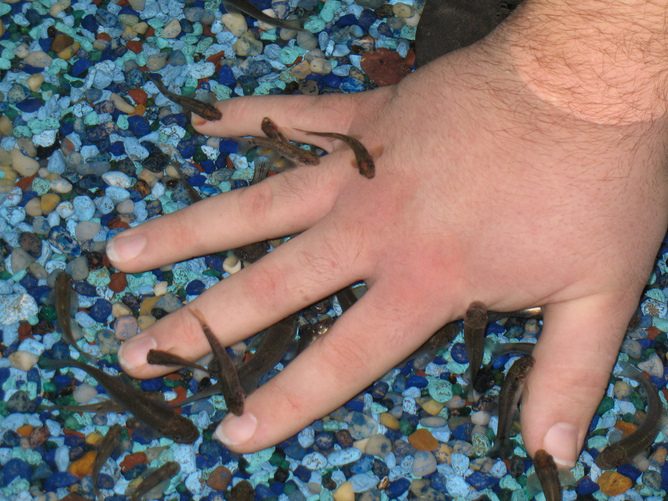 The name of this fish tells its whole story. The Stonefish has a stone-like surface that makes it unnoticeable among other real rocks, and that is actually where it likes to reside; in the shallows, totally still. Since it is barely seen, it can be easily stepped on and when that happens, it immediately injects its toxin into the human being foot, causing excruciating pain. The toxin of this fish can cause fatal damages ranging from muscle weakness to killing the tissues or from shock to impermanent paralysis. In some extreme and rare cases, it can lead to death too. 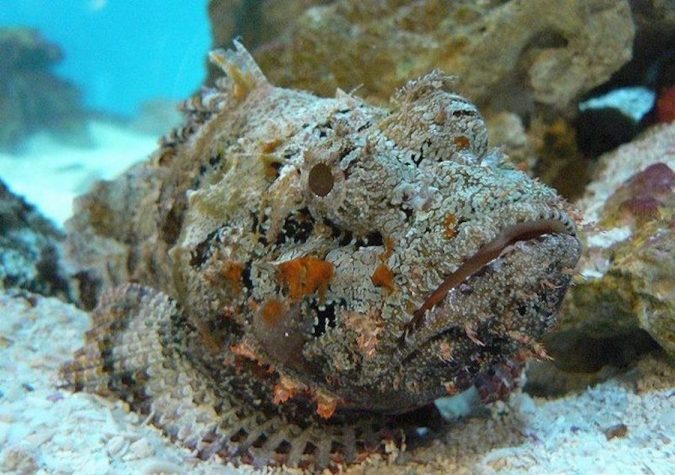 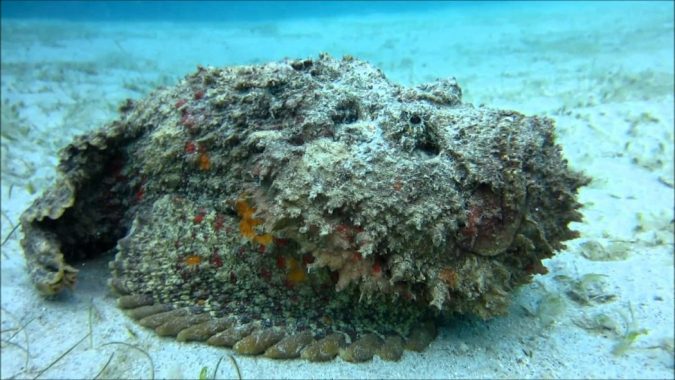 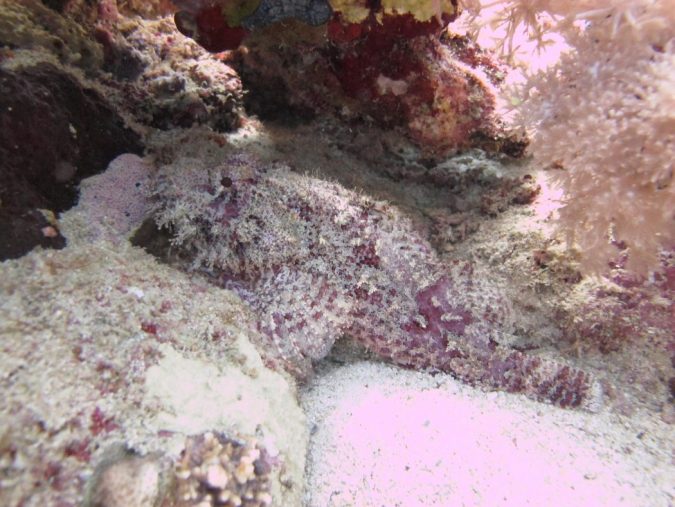 The lionfish is striped like a zebra, except that it is colorful. The poison of this fish lies in its dorsal spines, which are widely spread when it feels threatened, using them as defense tools. The lionfish is not hostile at all, but that does not make it any less dangerous, for when it spreads its toxic dorsal spines and gets in contact with another creature, the poison is rapidly injected into them, causing swelling, headache, and unbearable pain. In extreme cases where the poison is greatly absorbed, the body’s muscles stops working, and that includes the heart’s muscle too, leading to instant death. 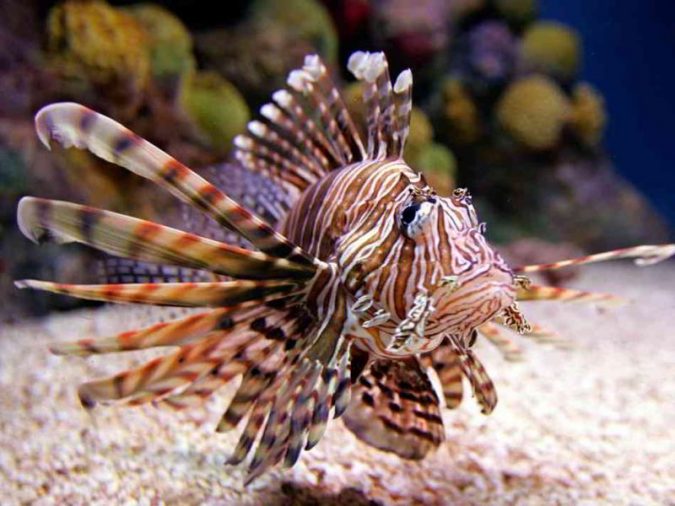 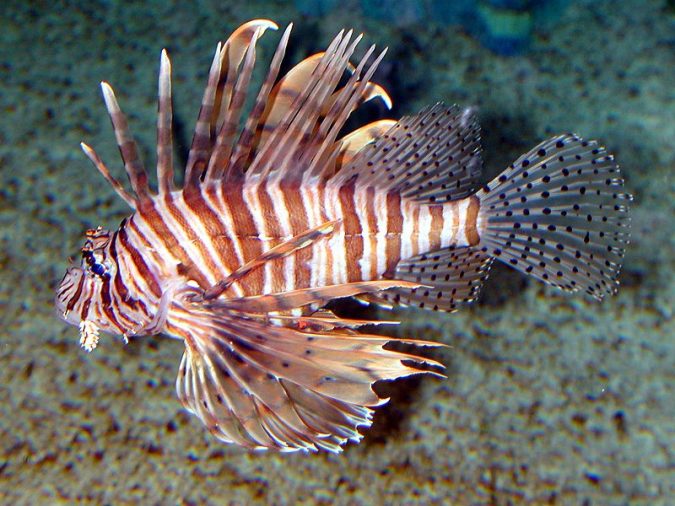 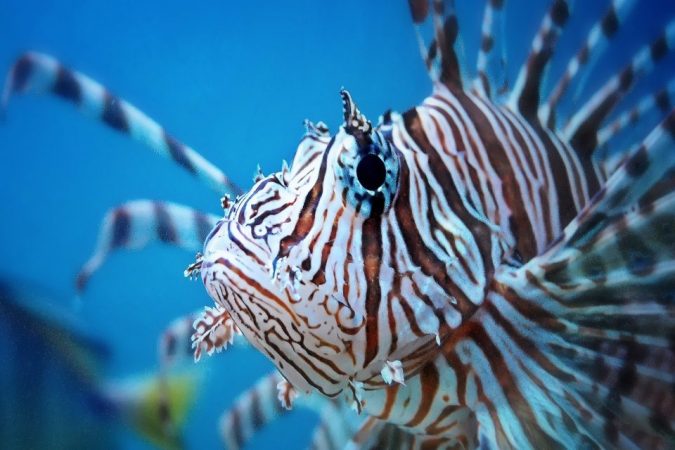 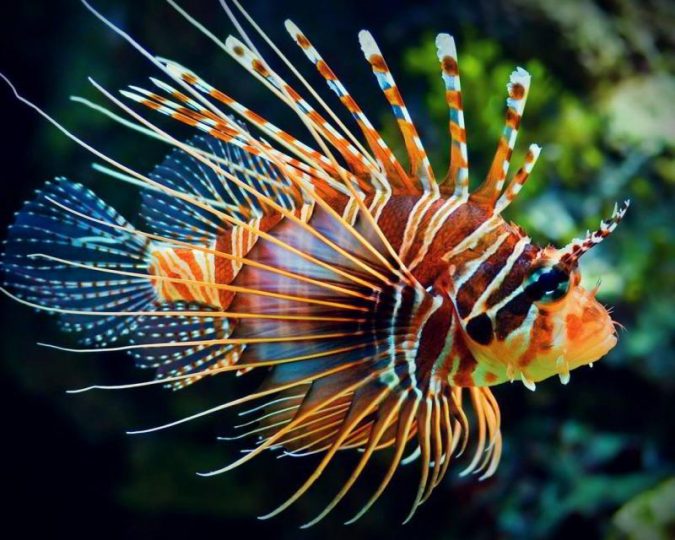 Almost everybody knows that Jellyfishes are called that way because they are very soft and wiggly creatures. They are known to be scary too because nobody likes getting stung, irritated swollen skin, but luckily most of their stings are curable. The most dangerous and toxic species among the Jellyfish family is the Box Jellyfish. It might look like an ordinary jellyfish, but the difference is that this one has real eyes. The poison of this fish is caught through direct contact by getting stung; this poison can be fatal causing instant death since it mainly attacks the cardiovascular system, leaving the victim to suffer from exceedingly low heart rate. If someone is lucky enough to stay alive, they will have to live with the permanent marks caused on their skin. 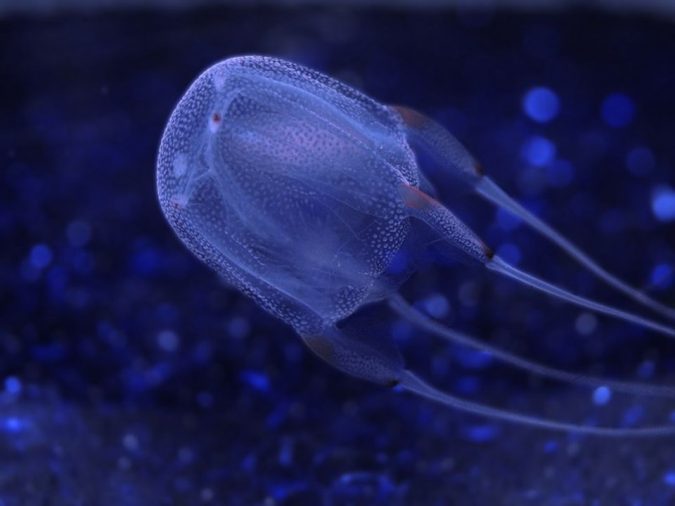 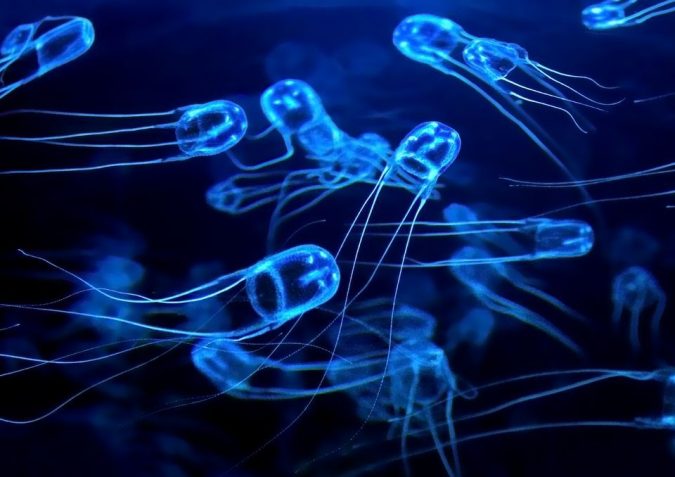 The Viperfish is one of the most poisonous marine creatures found in the extremely deep parts of the ocean. This fish has very large teeth that can be easily observed since they look like fangs and that is exactly where its poison lies, so Viperfishes poison is transferred to other creatures through biting. They are also very rapid attackers which usually stuns their prey, making the hunt easier. It has a relatively long dorsal spine that is known as the light-producing organ, for it has a real light and the viperfish uses this light by flashing it constantly to stir its preys’ curiosity and lead them towards it. It really seems a brilliant fish that knows how to attract its own meals without having to chase them. This might sound scary, but the good news is, it never gets attracted to human beings. 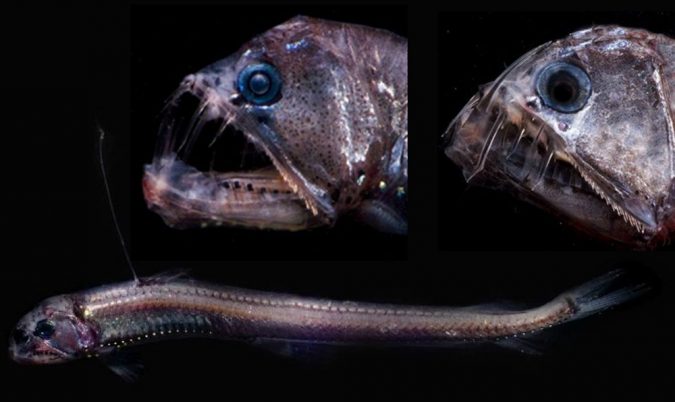 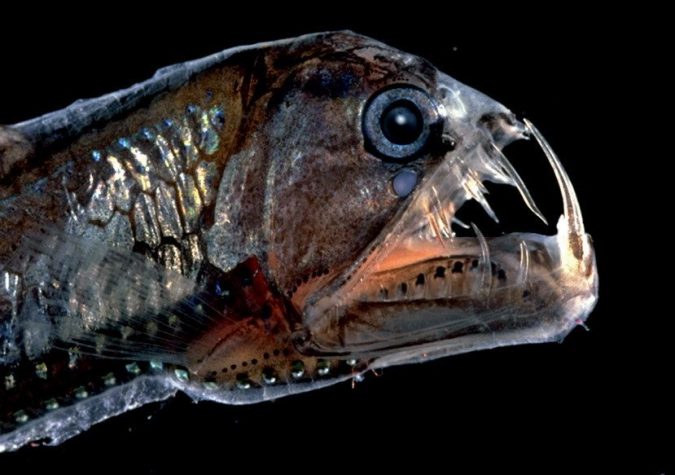 It seems like sharks are not the only scary marine creatures anymore, but that does not make them any less scary, because sharks can rapidly eat you alive while the previously featured creatures can let poison seep into your body. But to put a cherry on the cake, in this case a poisonous one, some of these poisons are fortunately curable.