We spend most of our time at home as it is the only place where we can relax and find the needed comfort. For this reason, we care more about decorating our homes and changing their decoration from time to time in order to make them catchier and more impressive. What about streets? We do not care about them just because they do not belong to us. Although they look boring, we do not try to decorate them to be more inviting. There are some creative artists who decided to pay more attention to those boring streets. They try to change their look through decorating walls and creating stunning works of art called murals.

The word ‘murals’ is used to refer to those paintings that are sometimes created on the outside walls of buildings. They are large in size and can completely change the look of the buildings and streets as well to be more fascinating. Creating murals is not something new that has recently appeared. There are many ancient murals that you can find in the ancient Egyptian tombs and Minoan palaces. Creating murals requires using markers and spray paints. You can use Molotow markers and spray paints to get the stunning results you want. There are also other brands you can find and try such as Ironlak, Kolour, and Flame, just to name a few. To learn more about murals and their ability to attract more attention, take a look at the stunning and creative artworks presented here.

Gris1 is a French artist who is known for his colorful murals and creative style. He created this mural in Toulouse, France in 2015 before the opening of Mr. Freeze exposition. The mural features a big wild cat and looks as if it was assembled from bubbles and lines that look like bracelets.

Nychos is an Austrian street artist who is known for his detailed murals. He focuses in his work on paying attention to those small details. For this reason, the animal and human figures that are presented by Nychos in his murals are anatomically depicted. Nychos created this mural in 2015 on the containers of the North West Walls festival instead of buildings.

This metallic and glossy mural was painted by Bik Ismo for the Raw Project at the Jose De Diego Middle School. Bik Ismo used spray paint to create this fabulous and unique mural. It took around four days to completely finish it and allow us to enjoy its breathtaking beauty.

Charles Leval, or Levalet as he is commonly known, is a French artist who is known for his impressive murals. He is considered to be unique as he tries to make use of the surrounding items and his characters usually interact with the architecture to finally present to us amazing works of art. The mural presented here is called Nausée and was created in Paris in 2015. It interacts with the fountain to look more fascinating.

If you are one of those who love animals and birds, you will surely like this mural. It is more than stunning since it features a lovely pigeon that may look angry. It was created in Goes, the Netherlands for Mural Goes NL and it is about 32 meters tall or 11 stories high. The professional artist who painted this mural is Stefan Thelen. He is a freelance artist and is also called Super A.

Xav is a self-taught Spanish artist who is really talented and is known for his realistic portraits. In addition to being a creative street artist, Xav is also a tattoo artist. His unique painting technique makes him one of the best street artists in the world and not just in Spain. ”Female Portrait”, which is one of the latest murals created by Xav, is fascinating and features a gorgeous woman like other murals he created before. 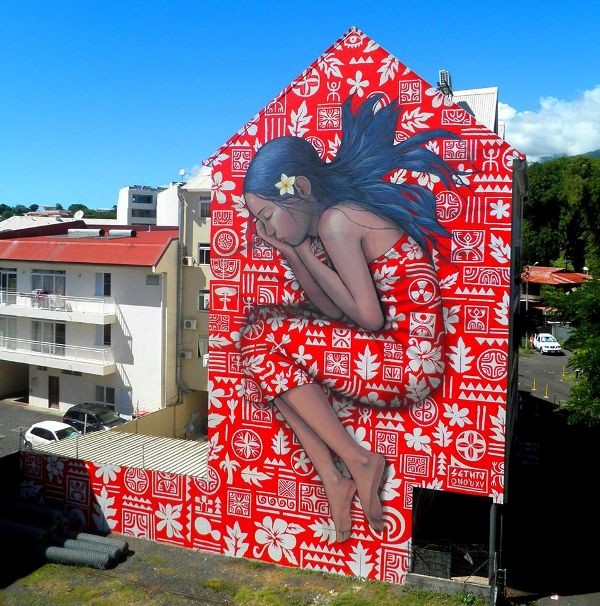 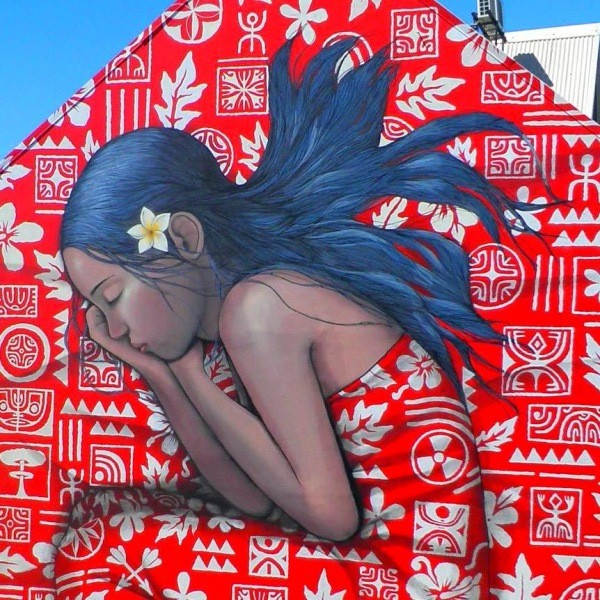 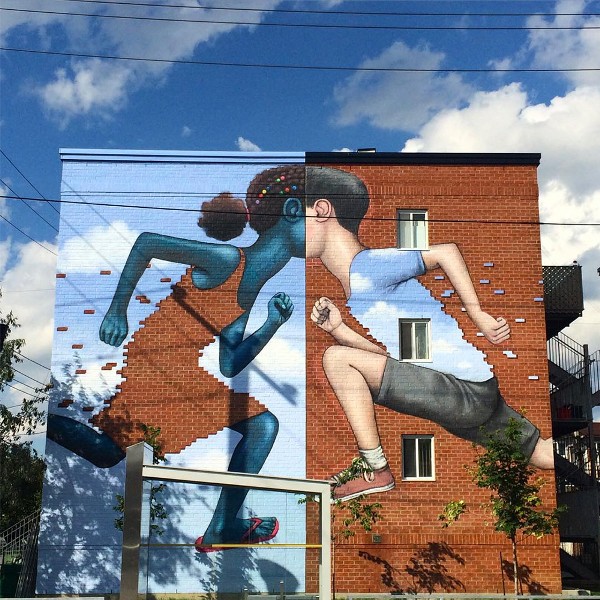 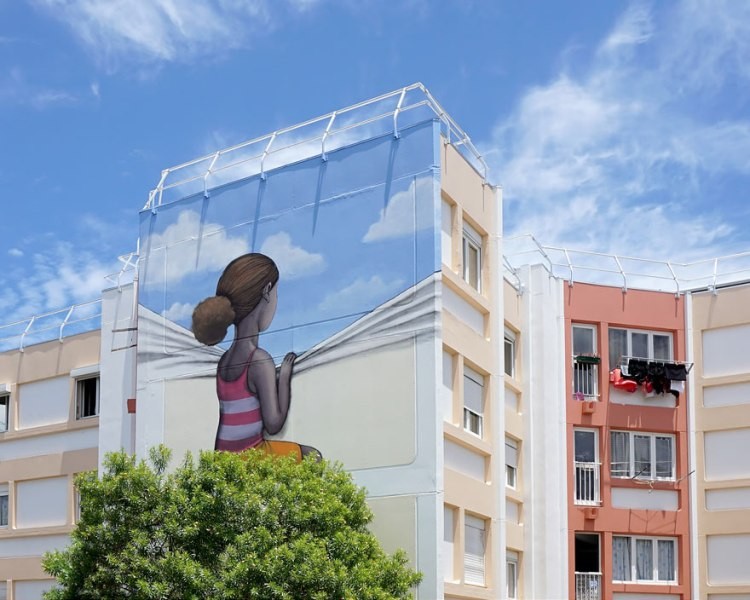 Julien Malland, also known as Seth Globepainter, is a French street artist whose colorful murals can be found in different countries around the world such as China, India, Mexico, Canada, and more. He finds the needed inspiration in the surrounding environment and the places he selects for painting his murals. Most of Seth’s large-scale murals come to depict children and this is why they are colorful. Sleeping girl, that depicts a Tahitian girl in a deep sleep, was created by both Seth Globepainter and Tahiti street artist HTJ. Another stunning mural created by Seth Globepainter features two children running into each other.

This fascinating mural was painted by the creative artist Gamma Acosta who is also known as Gamma Gallery. He has the ability to create large scale murals of his own design. He is known for creating amazing photo-realistic pieces and he depends on using spray cans to paint them. On the north-facing wall of Monkey Barrel that is located at Platte Street, Denver, Colorado, Gamma decided to create this mural. It features a beautiful female artist called Zaira Estrada and it is considered to be one of the best street art portraits created by Gamma. 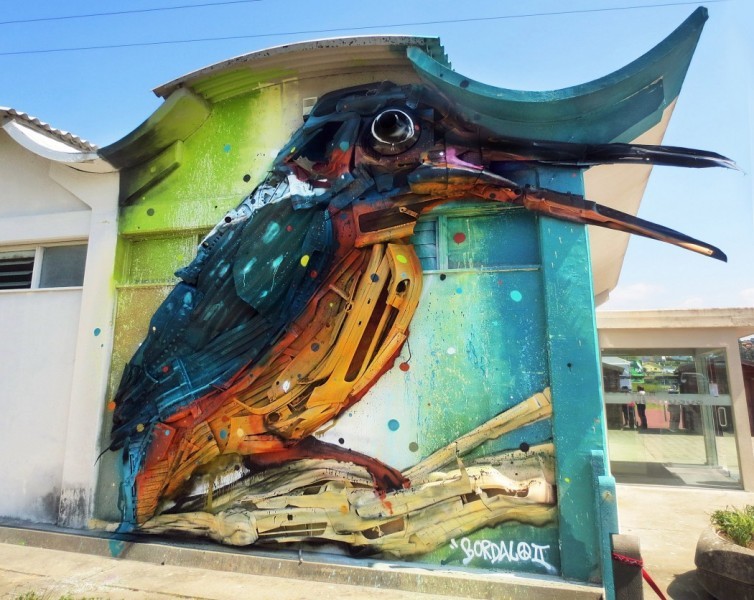 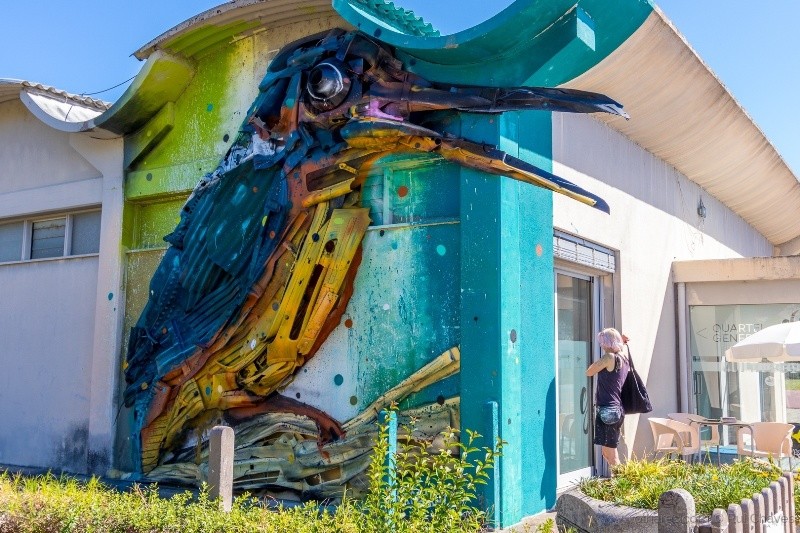 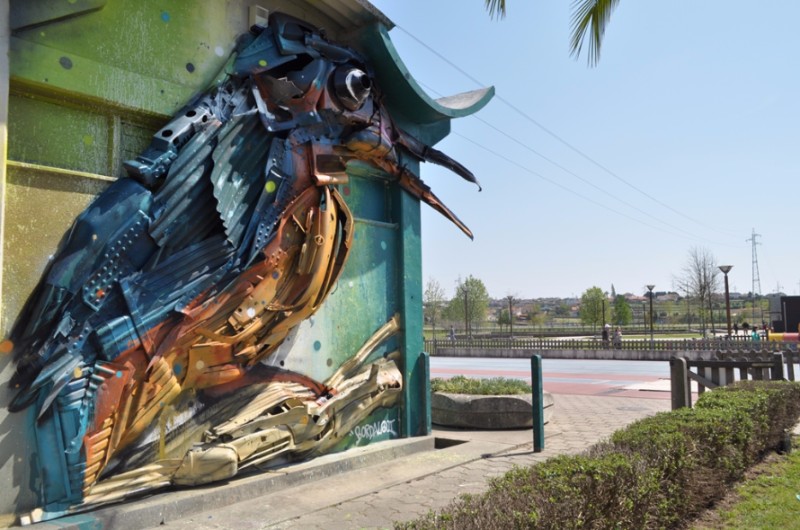 Artur Bordalo, or Bordalo II as he is commonly known, is a Portuguese artist who is completely different from other street artists. This is because he does not create his murals to just decorate buildings and streets or get money for that. The dazzling murals he creates reflect his environmental consciousness. He tries through his murals to solve the problem of trash. He uses old tires, scrap wood, appliances, and aluminum cans to create his artworks by turning them into colorful birds and animals. It is worth mentioning that the name of this mural “Guarda Rios” means kingfisher in English.

1 Everyone Is Searching for It – Millo

”Every One Is Searching for It” is a black and white mural that can quickly touch your heart once you see it. This is because it is really about what we are looking for and is associated with emotions. It simply tells the stories we all live. Some people search for love and hope, while there are others who suffer from loneliness. The mural was created in Milan by the Italian artist Millo who is also known as Francesco Camillo Giorgino. He paints large-scale murals and rarely uses colors in his creative work.

Who is your favorite artist?

Are there any other creative murals you want to add to this list?