There can be no denying the usefulness (and often, the importance) of having a portable generator. Whether it’s during the heat of high summer, or in the dark depths of winter, if the power goes out, it’s not much fun. Choosing the right generator can be tricky. There are a lot of different models available and, depending on your needs; there are different variables that will be important. You need to consider fuel types, power output, running time, portability, cost, and safety features. When buying a portable generator, you need to have planned where you’re going to put it, and what sort of tasks it will be used for, as these will also influence your decision.

We’ve examined ten of the best portable generators available on the market today to find out what it is that makes them so great. We’ll look at their key features and some of the situations they can be used for. Our list features some of the top brands, including Predator, WEN, Honda and Briggs & Stratton. Hopefully, once we’ve finished our reviews, you’ll be able to determine which one is best suited to your needs.

One of the sturdiest portable generators available is this model from Predator. It’s made with a ‘built-to-last’ mentality, and delivers up to 7000 watts of power, producing 13 HP or 420cc. The steel frame of the Predator ensures the internal workings are safely protected so that it can withstand almost any situation. Regarding price vs. power output, this is a very competitive model; few others can match what it offers. Furthermore, the tried and tested engine is easy to maintain, or repair should anything go wrong.

The two-wheeled design makes this a fairly portable unit. However, the strong construction does mean it’s incredibly heavy. To combat this, the design allows for a good degree of movability. Another useful feature is the four 120V outlets that are fused to handle up to 20 amps per outlet. This makes it versatile and powerful, and our top pick of the best portable generators. 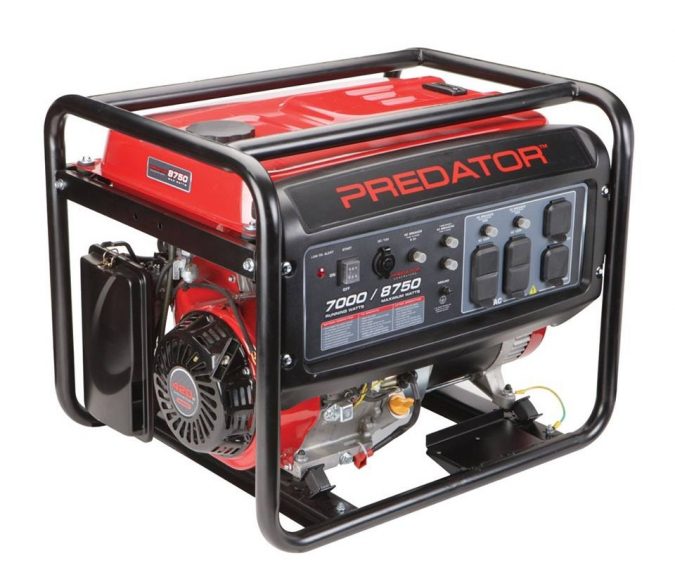 The WEN 56200i more than justifies its ‘Super Quiet’ title. When operating, the noise produced is equivalent to a normal conversation (around 51 decibels) according to the US Department of Health and Human Services. This quietness makes it the ideal camping companion.

One of the great features of the WEN 56200i is its ability to produce consistently clean energy. By this, we mean a constant voltage without spikes or drops. Devices such as phones, laptops, and TVs can be safely used with this generator. 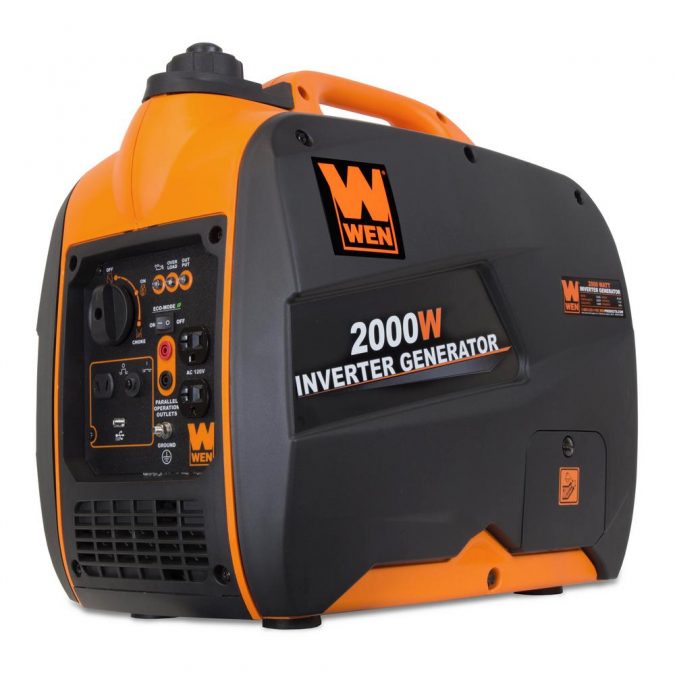 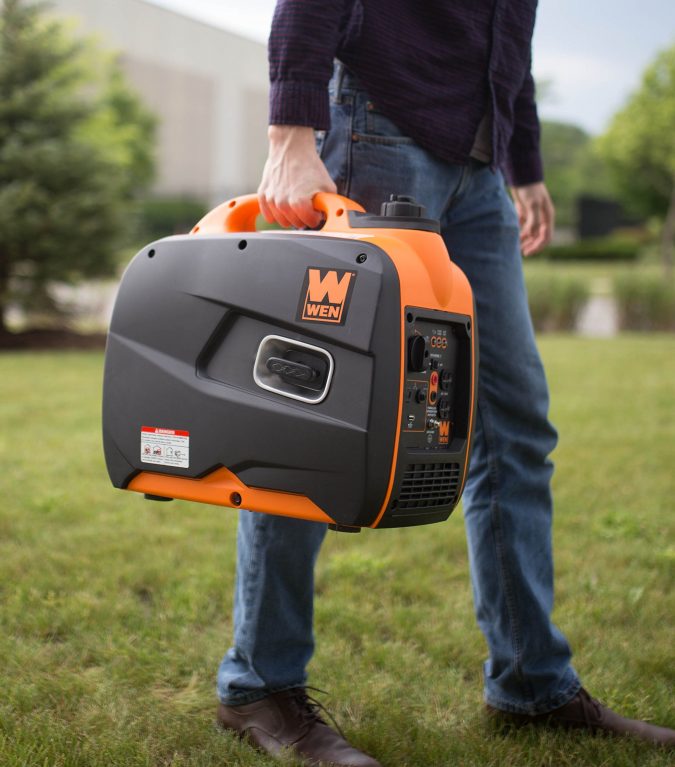 Honda’s EM6500S is an excellent portable generator for almost any setting. Whether it’s being used every day on a construction site, or simply as a backup for mains power, it will deliver excellent results. A sturdy design houses a great Honda engine that is capable of pumping out 6500 watts. It’s also capable of outputting 7000 watts in short bursts to start more demanding equipment and appliances.

Although the gas tank isn’t the biggest on the EM6500S, it’s still capable of sustaining the generator for around 10.4 hours on a half-load. This impressive performance will be suitable for many different customers. 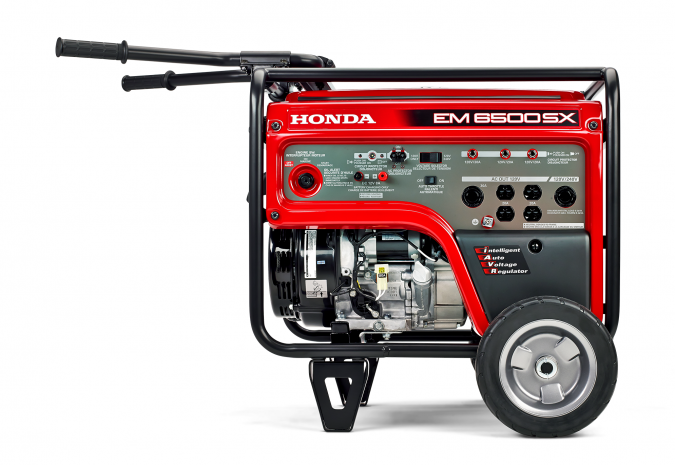 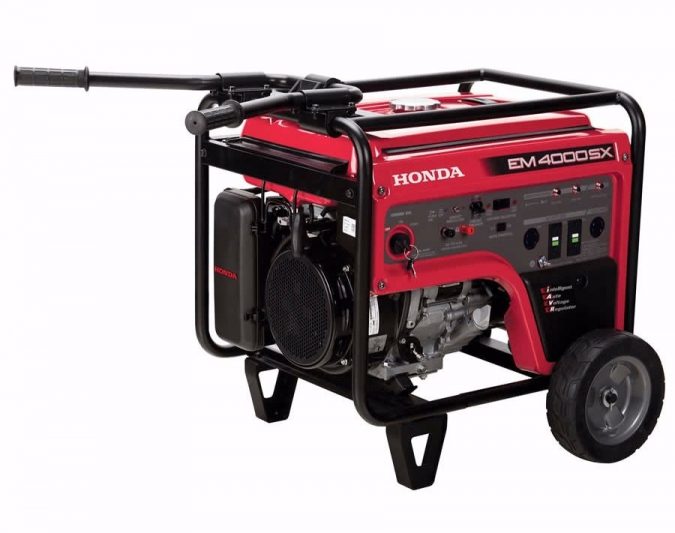 This unit is the perfect choice for those needing a backup for mains power. It’s quick and easy to start, meaning that essential appliances can be up and running quickly in a power outage or natural disaster. The 7.5 gallon fuel tank will keep the generator running for around 9 hours on a 50% load. Like the above Honda model, a surge alternator allows for bigger appliances to be started off this generator. Briggs & Stratton engines are renowned for their excellent performance and reliability, and the 30663 is no exception to this. It’s easy to maintain and repair, and comes with a 3-year warranty. 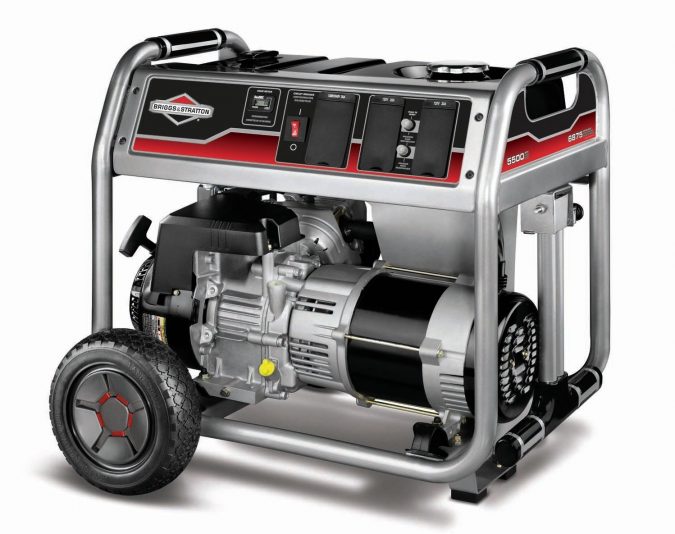 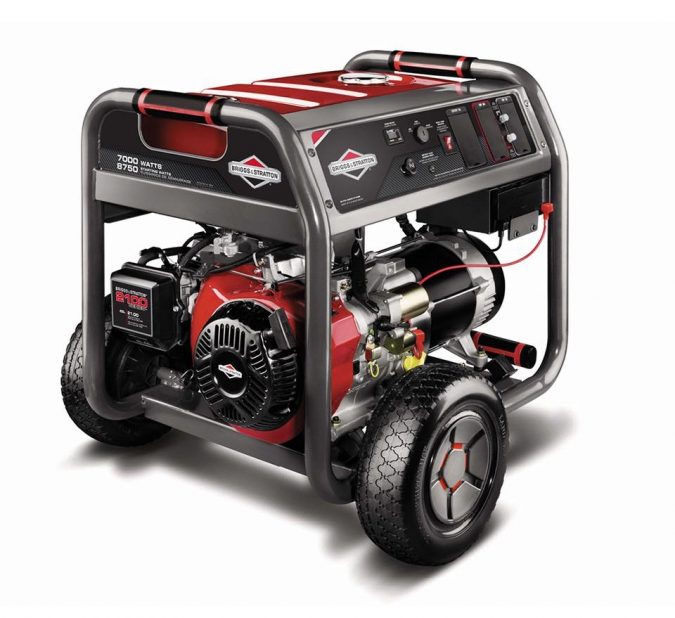 The high output of the Champion Power 7500 makes it the ideal choice for running a whole host of different appliances. Not only does it produce 7500 watts, but it can also produce 9375 starting watts when running on gasoline. Concerning noise, it’s relatively quiet; only 74 decibels are audible from 23 ft. Features such as Volt Gard and Cold Start technology are bonuses. The former protects appliances from any voltage spikes, and the latter helps ensure that the generator starts in cold weather. Overall, this is an excellent generator for those in need of a backup. 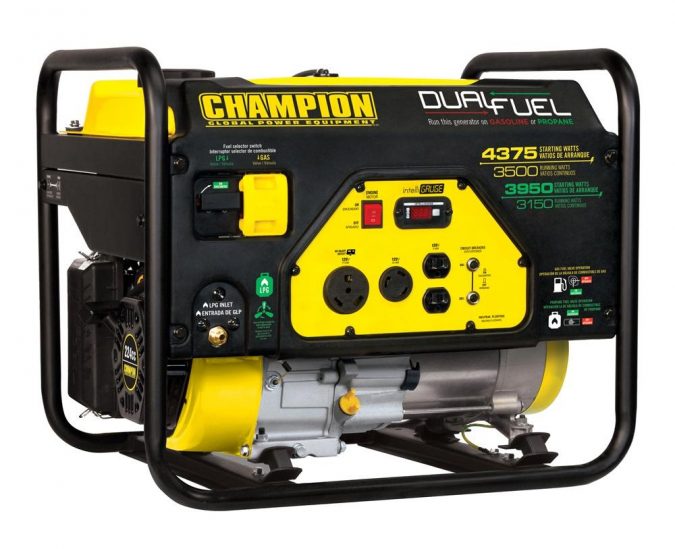 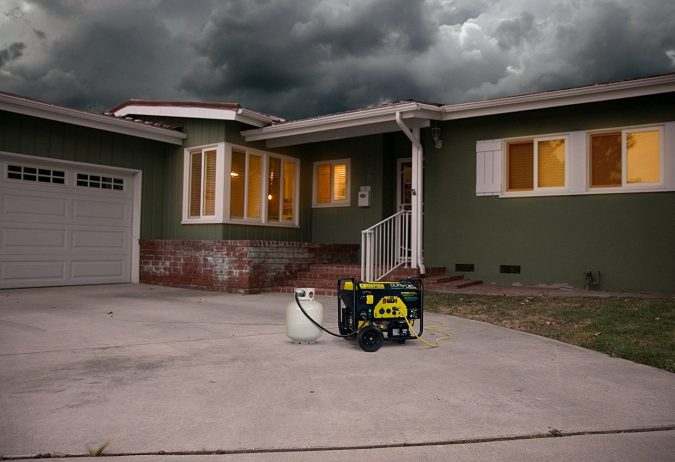 Both the styling and the performance of the 30545 P3000 is up to the usual Briggs & Stratton standard. The design of the P3000 makes it perfect for taking out and about. The sturdy wheels and telescopic handle make it possible to pull the generator along with minimal effort. In terms of power, the 2600 running and 3000 starting wattage should be sufficient for a range of devices. For such a small generator this does deliver a good amount of power. Furthermore, seven different power outlets give you plenty of options. Overall this is one of the most portable devices on our list. 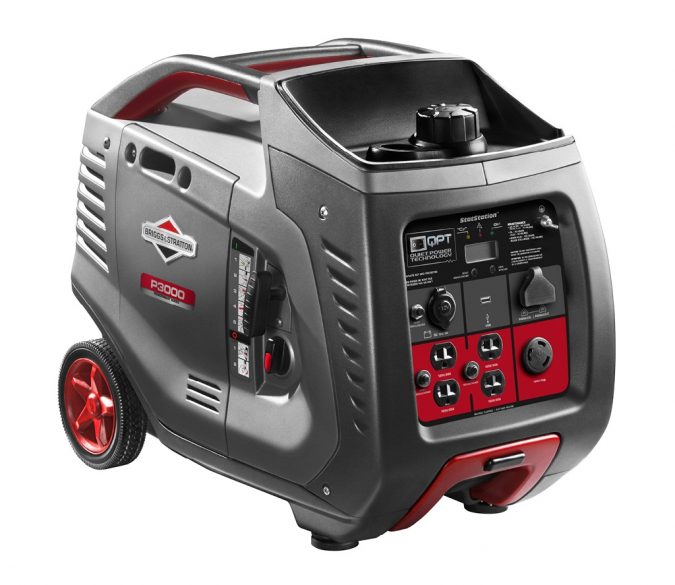 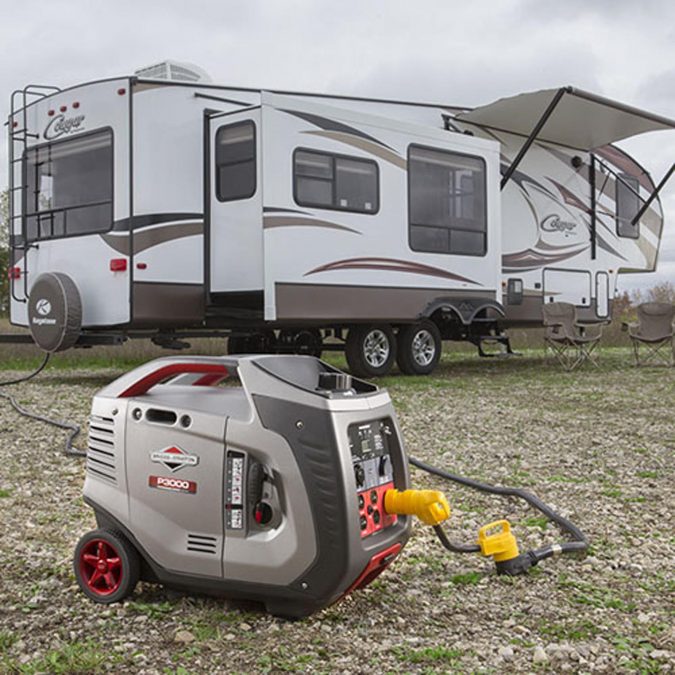 Although this unit may seem a little out of place amongst the behemoths we’ve already seen, it’s still an impressive and extremely portable device. If you spend a lot of time outdoors and on the move, this is the ideal choice for you. It’s powerful enough to run a range of appliances, with a 220-watt output. It has 2A ports, two USB ports, one two-prong AC port, and one three-prong AC port. The design of the Suaoki is compact and attractive, making it convenient to carry with you almost anywhere. 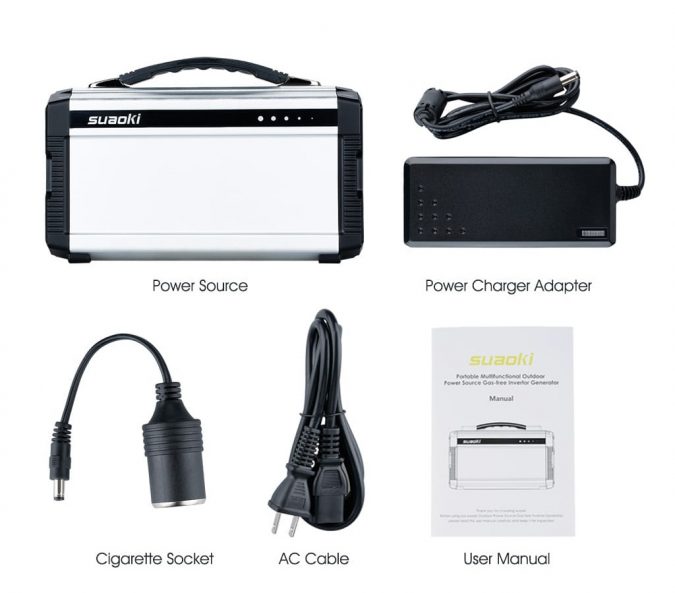 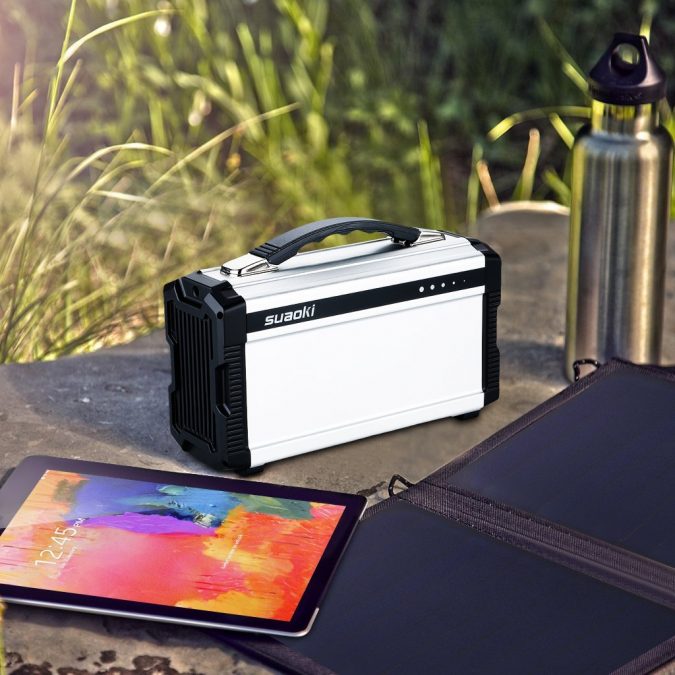 Westinghouse has been making generators for a long time, and they’ve gotten pretty good at it. This is evident when you look at the WGen5500. With an output of 5500 watts and a starting wattage of 6850 watts, you’ll be able to power most appliances in your home. This makes it a solid choice of a generator for power outages. Fuel consumption is quite good, so expect to get around 13 hours out of a full tank when running on a 50% load. What’s more, it’s a surprisingly light unit given its size, weighing in at 179lbs. 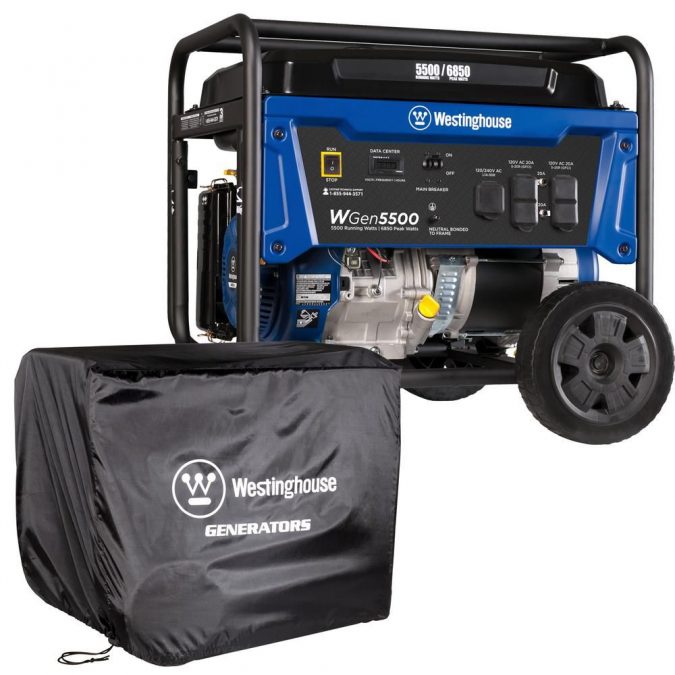 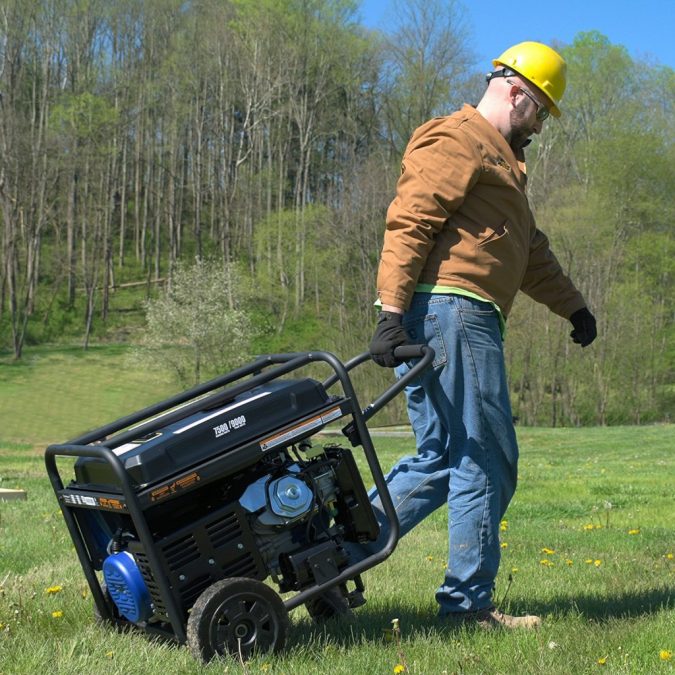 Yamaha is known for innovative technologies, and the EF2000iSv2 features some handy ones. In this compact 44lbs unit is an air cooled single cylinder 4-stroke engine that produces 1600 watts of power. The advanced controller system results in improved output accessibility over previous models and the Smart Throttle varies the engine speed. When it’s operating, it only produces 51.5 decibels when running at quarter load and 61 decibels when running at full load. 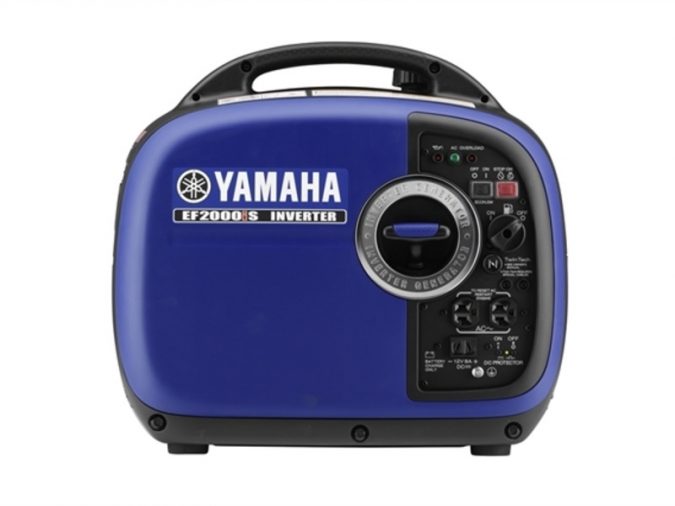 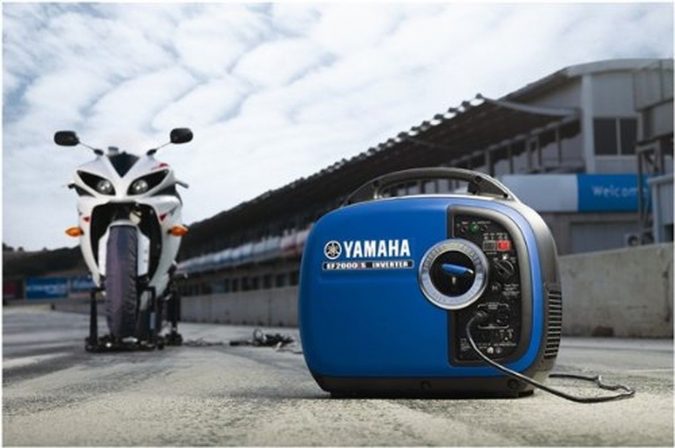 Last on our list of the best portable generators is the DuroStar DS4000S. Although it doesn’t excel in any particular region, it is perfect across the board. This is a fairly mid-weight model that produces a reasonable amount of power in a fairly compact design. It’s not too noisy, producing about 69 decibels when running. It’s a solid choice as an emergency backup in the house, or as an RV generator. Performance is good in all areas, although there are better units out there. 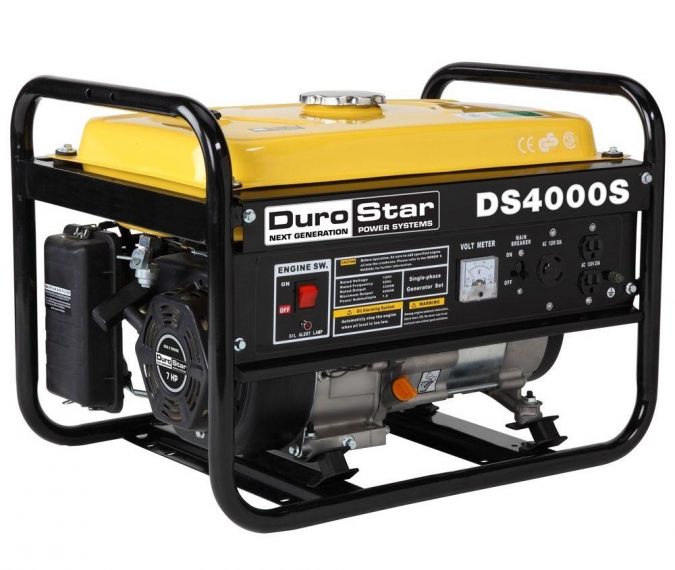 Having a generator that will be in great working order when you need it most is essential. Pick a reputable one and have the peace of mind that it will always run the way it’s supposed to, with plenty of power for all of your needs.