The history of developing bridge construction is closely linked with the history of human civilization. This is a list of the world’s top ten longest bridges more than two kilometers long sorted by the full length of their main spans above land or water. They are somehow wonders and landmarks on the earth as long as they exist all over the world. Suspension bridges have the longest spans according to the type of the bridge and they also vary in their designs. Bridges have always been an important part of our environment. They have been major subjects of literature and art, both ancient and modern. Wars have been fought over bridges and in many cases the capture of a strategic structure has a pronounced effect on the final outcome of the war.

The Bay is the largest estuary in the United States and one of the largest in the world.  Its entrance is marked by the Chesapeake Bay Bridge Tunnel (CBBT).  The CBB, which is a dual-span bridge, is 4.316 miles (6.946 km) long and has four man made islands and thousands of concrete pilings to connect the Eastern Shore with the Western one.  This structure is one of the greatest fish magnets in the world, attracting and holding fish throughout all the seasons of the year. The Bay also has natural structures including grass beds, oyster bars, sand bars and deep water cuts over 200 feet deep. Add the man made structures like buoys, shipwrecks and artificial reefs and you have an incredible complex of fish habitats. 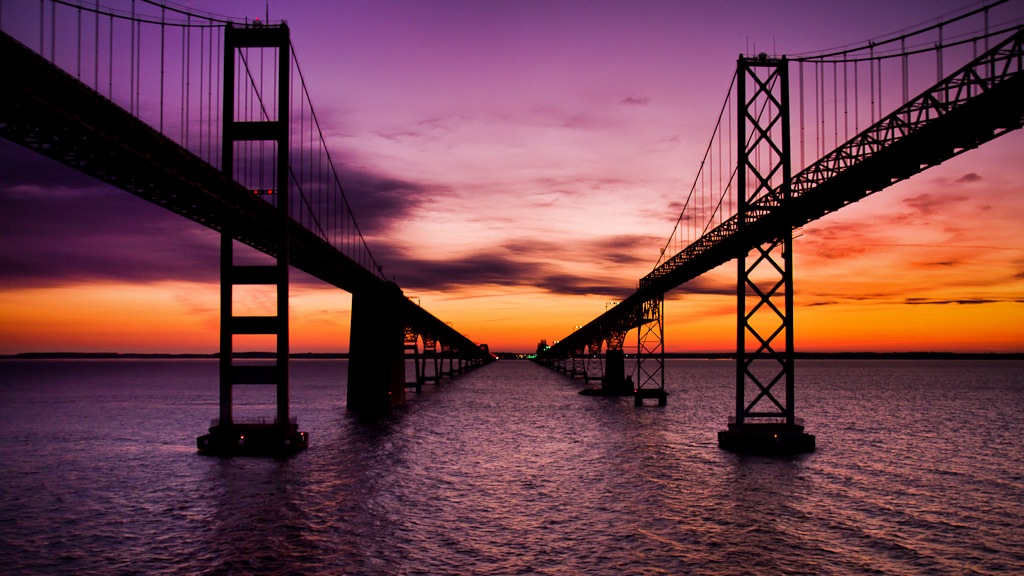 The Seven Mile Bridge is an iconic bridge in the Florida Keys, United States, stretching out over the open sea to connect Knight’s Key in the Middle Keys to Little Duck Key in the Lower Keys. At the time of its completion in 1982, it was the longest continuous concrete segmental bridge in the world and is currently one of the longest bridges in America with a total length of 6.79 miles. Seven Mile Bridge actually consists of two bridges in the same location; the older bridge and the new bridge which is less than seven miles and is shorter than the original one. The old bridge is still a popular spot for both locals and tourists. 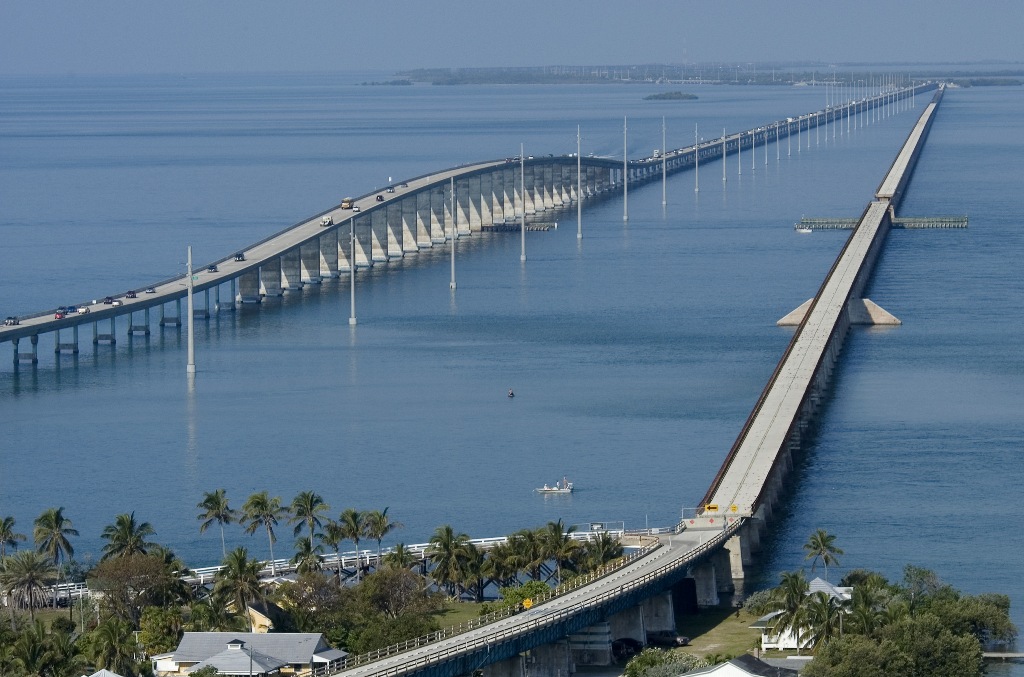 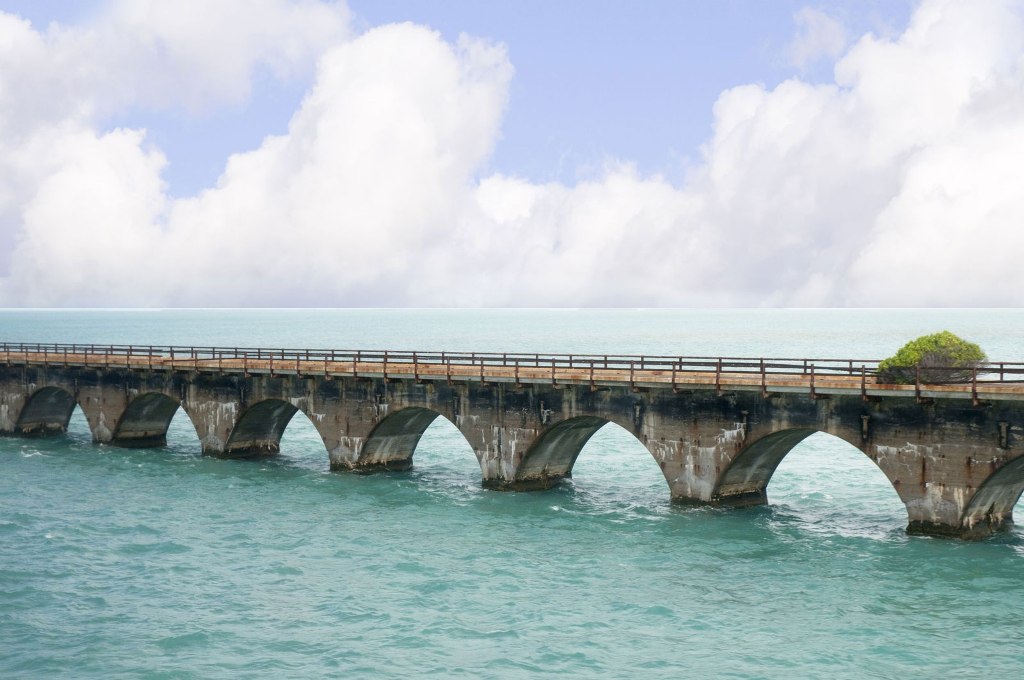 The San Mateo-Hayward Bridge is commonly known as the San Mateo Bridge and is located in the United States. It crosses California’s San Francisco Bay in the United States to connect the East Bay with the San Francisco Peninsula. More specifically, the bridge’s western end is in Foster City, on the eastern edge of San Mateo, and the eastern end of the bridge is in Hayward. The bridge belongs to the state of California, and is maintained by Caltrans, the state highway agency. The bridge is the longest one in the San Francisco Bay Area and the 25th one in the world with a total length of 7 miles (11.3 km). 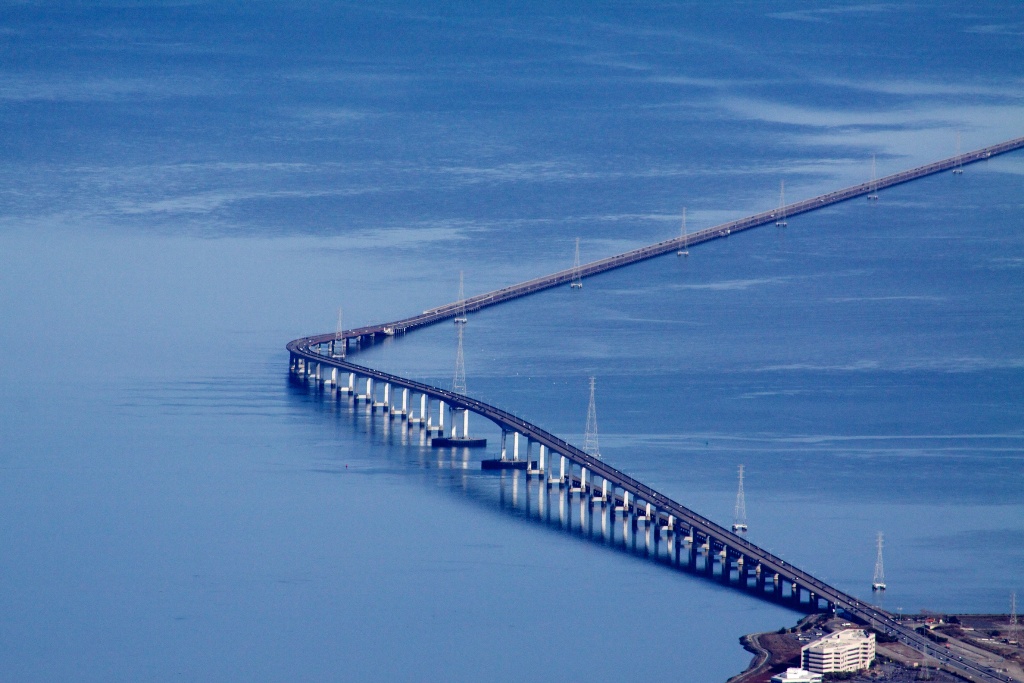 The Confederation Bridge connects the eastern Canadian provinces of Prince Edward Island and mainland New Brunswick making travelling through the Maritimes easy and convenient. The curved 8-mile (12.9 km) bridge is the longest bridge in the world crossing ice-covered water and, a decade after its construction, it is still one of Canada’s top engineering achievements of the 20th century. The bridge’s construction started in October 1993 and was finished in May 1997 to be opened on May 31, 1997. 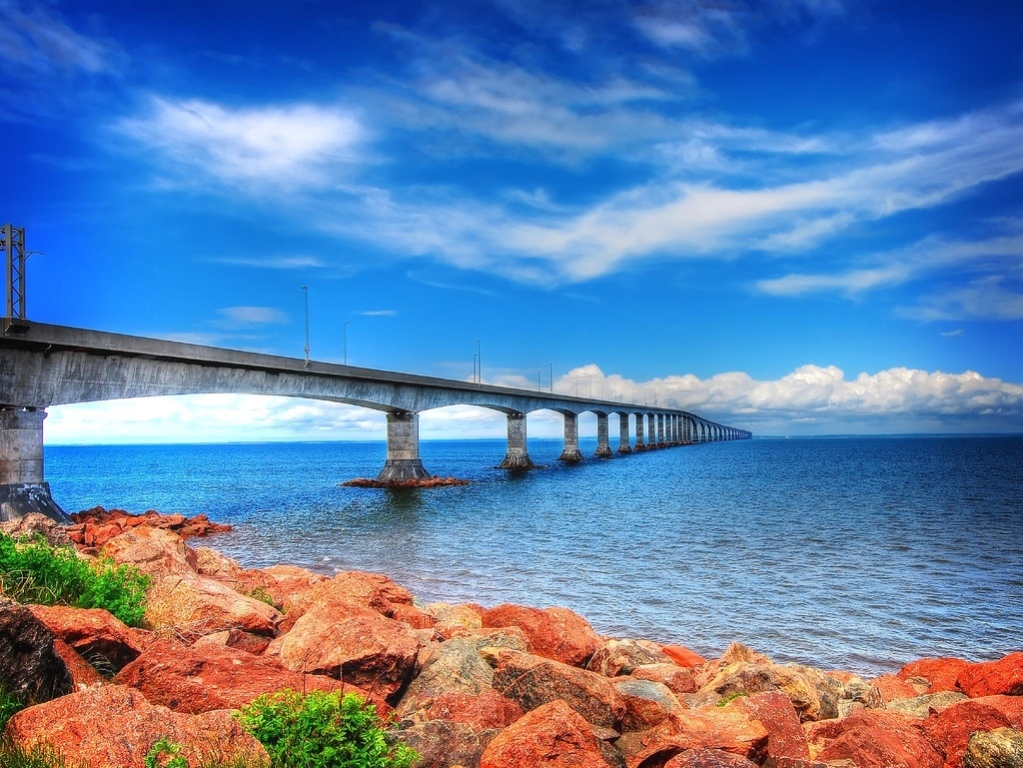 Its official name is “President Costa e Silva Bridge” to honor the Brazilian president who ordered its construction. “Rio–Niterói” started as a descriptive nickname that soon has become better known than the official name. Its construction began on August 23, 1968 and the inauguration was on March 4, 1974. The bridge is part of Highway BR-101 that crosses the coast of the country, from the northeast to the south. The bridge is located in the State of Rio de Janeiro, Brazil and crosses the Guanabara Bay to connect the cities of Niterói and Rio de Janeiro with a total length of 8.25 miles (13.29 Km). The Rio–Niterói Bridge is the longest prestressed concrete bridge in the southern hemisphere and the 6th longest one in the world. 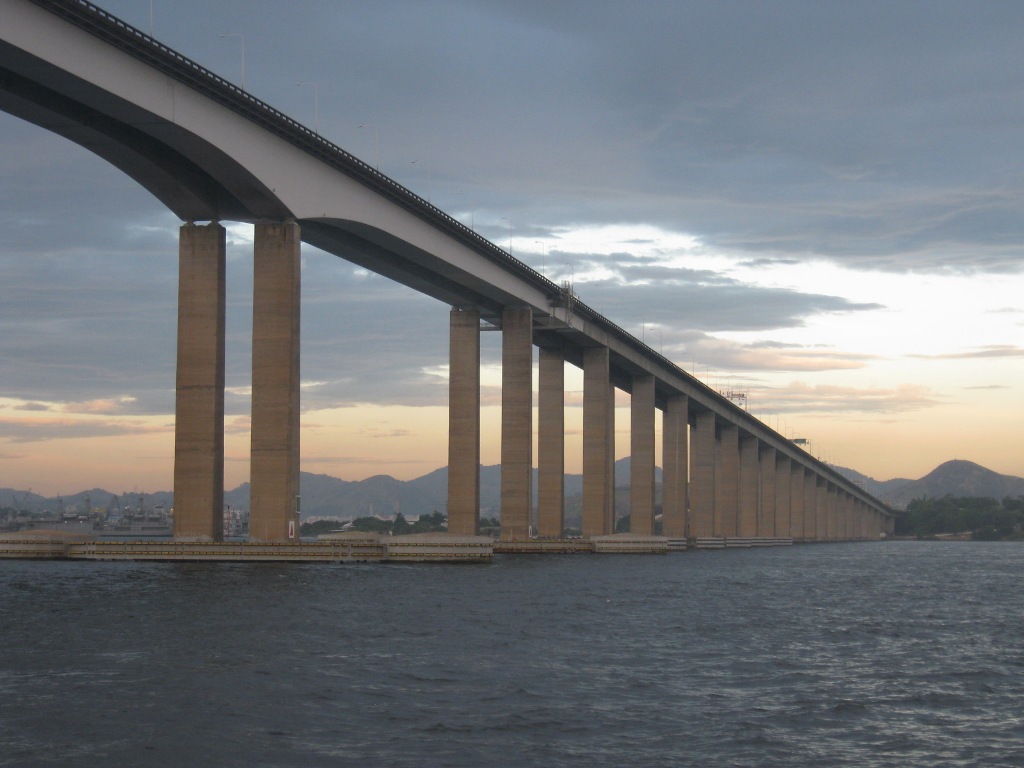 The Penang Bridge is a dual carriageway toll bridge that is located in Penang, Malaysia and connects Gelugor on the island of Penang with Seberang Perai on the mainland side of Malaysia on the Malay Peninsula. The total length of the bridge is 8.4 miles (13.5 km) making it among the longest bridges in the world, the 2nd longest bridge in the country, the 5th longest bridge in Southeast Asia as well as being a national landmark. Currently, the Penang Bridge is being expanded from 4 lanes to 6 lanes to accommodate the increasing traffic on the bridge. The Penang Second Bridge has been approved by the Malaysian federal government. 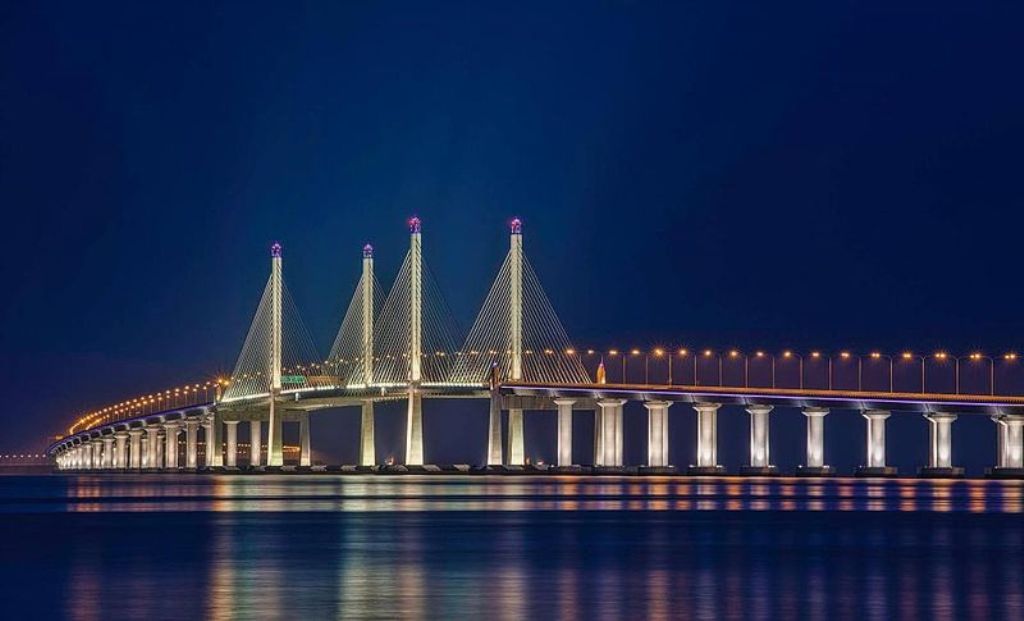 The Vasco da Gama Bridge is a vast structure that is 10.7 miles (17.2 kilometers) long. It is a cable-stayed bridge and was first opened on March 29, 1998. It is considered to be the longest bridge in Europe and to this day, it remains as one of the longest bridges in the world with 10 km of it passing over water and a suspension section, that allows ships to pass through, close to the Lisbon side. The bridge is located in Parque das Nações, Lisbon, Portugal and crosses the Tagus River to connect Sacavém on the right bank with Municipality of Alcochete on the left bank. The Vasco da Gama Bridge was named after the famous maritime explorer and was built just in time for the World’s Fair to celebrate the 500th anniversary of his discovery of the sea route to India. 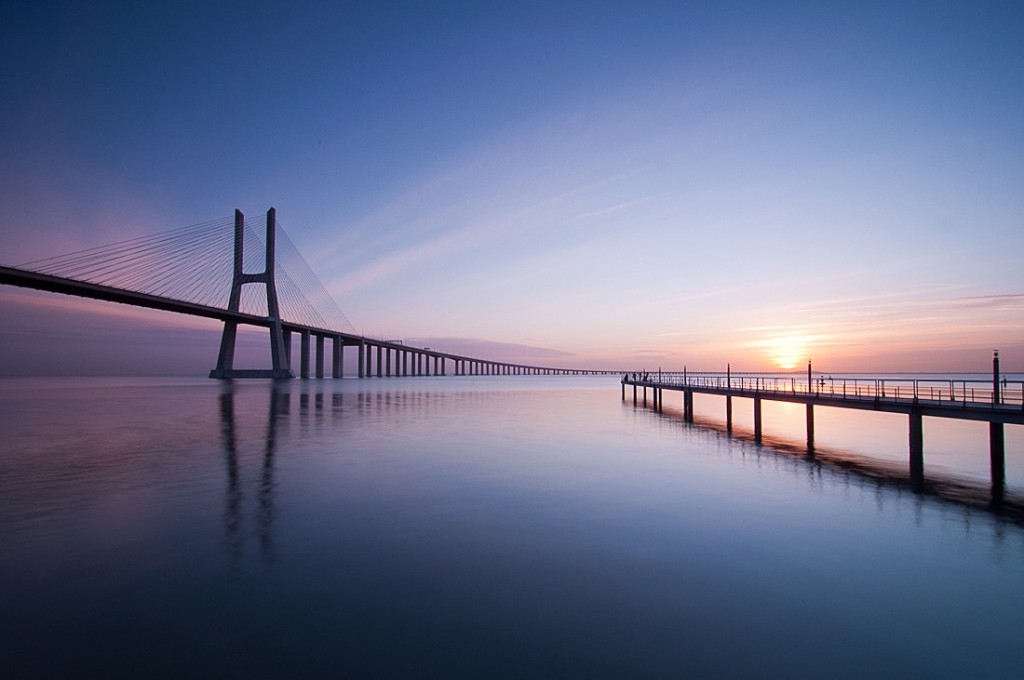 The King Fahd Causeway is multiple dike – bridge combination connecting Khobar, Saudi Arabia and the island nation of Bahrain. A construction agreement was signed on July 8, 1981 led to beginning construction in the following year. The cornerstone was laid on November 11, 1982 by King Fahd of Saudi Arabia and Sheikh Isa bin Salman al-Khalifa of Bahrain. The construction continued until 1986, when the combination of several bridges and dams were completed. The causeway which is 16 miles (25 km) long was officially opened for use on November 25, 1986. 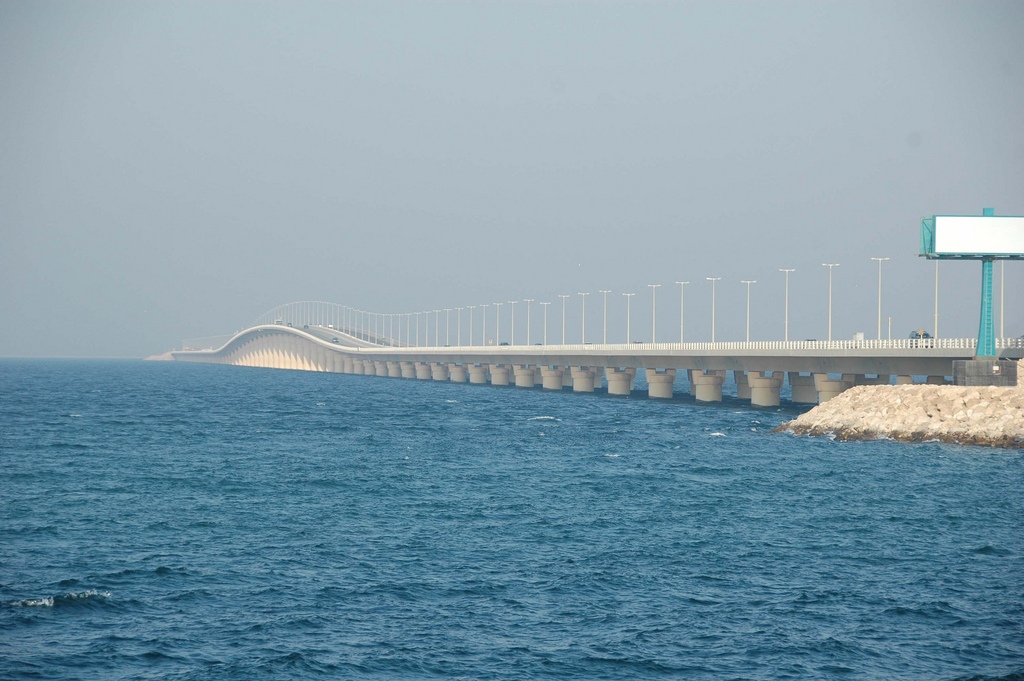 Donghai Bridge is one of longest cross-sea bridges in the world. It is situated in China. It has a total length of 20.2 miles (32.5 kilometers) and connects mainland Shanghai’s Pudong New Area and the offshore Yangshan Deep-Water Port in China. It was completed on December 10, 2005. Donghai Bridge is known to be part of the S2 Hulu Expressway. 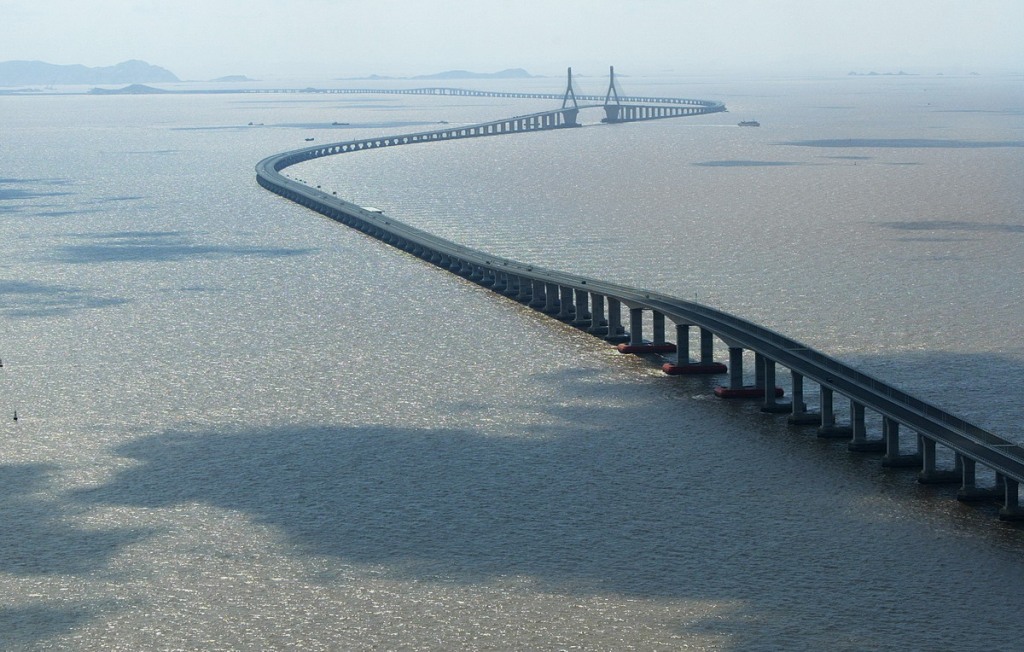 The Lake Pontchartrain Causeway is the longest bridge over water in the world with a total length of 23.87 miles (38.442 km) and it consists of two parallel bridges. It crosses Lake Pontchartrain and links Metairie on the South Shore of the lake with the City of Mandeville on the North Shore. Pieces of the bridge were loaded on barges and towed to the spaces where they were needed on the lake. The bridges are supported by 9,500 pilings, over 50 inches in diameter. They were the largest pilings ever driven at the time of the first bridge’s construction. 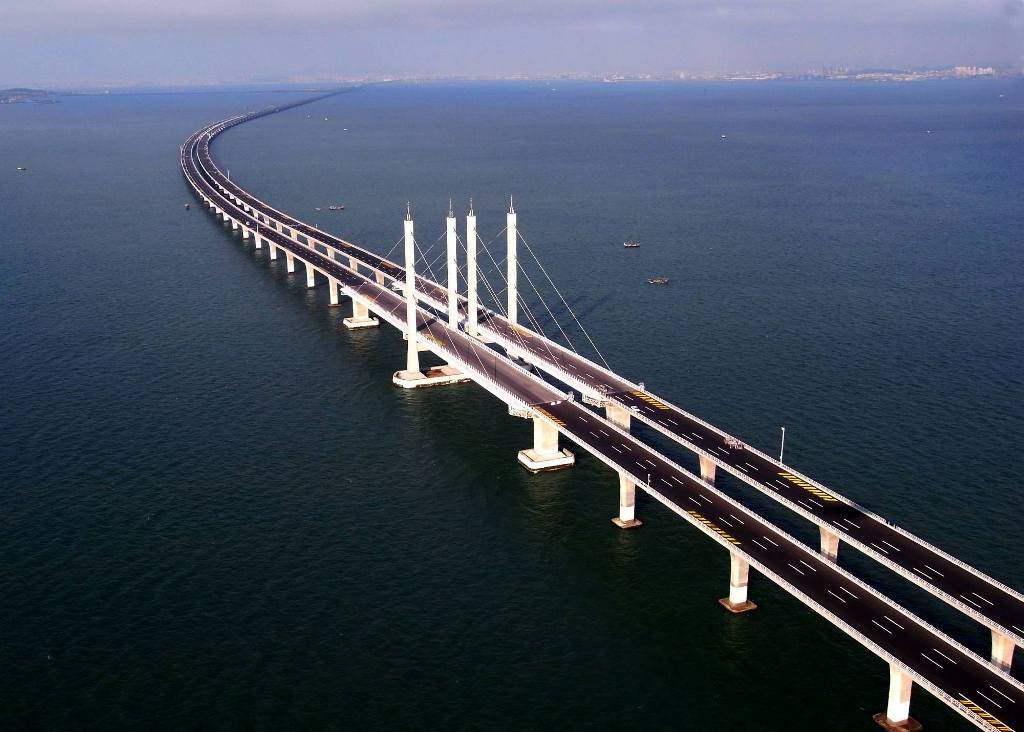 These are the top ten longest bridges that continue to inspire us with their marvelous creativity.